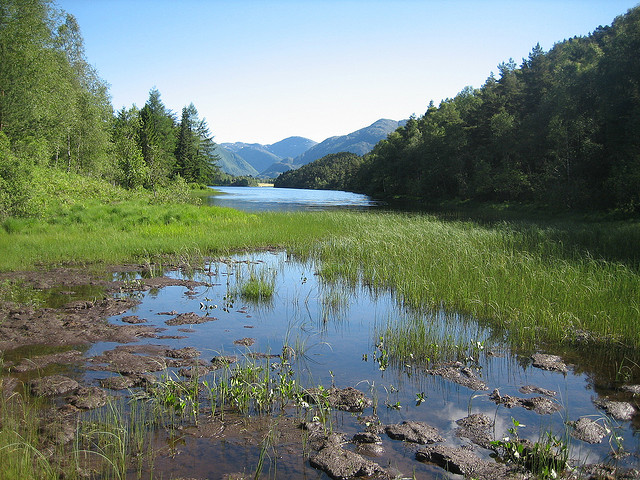 Flood control, storm resistance, carbon sequestration, water filtration and biodiversity conservation are just a few of the ecosystem services wetlands provide to people. These wetlands are inextricably linked to human health and world economies as our drinking water and food supply, agricultural production, fisheries and tourism depend on their wellness. Wetlands are an important part of the nexus that is created between water, food, and energy.

But despite the collection of services, incorporating the value of wetlands into economic and developmental policies is mostly not done, allowing for conditions like urbanization and pollution, intensive agriculture and poor infrastructure to degrade them.

To better understand the nexus between water, energy and food and to evaluate ways that would incorporate the value of wetlands into decision-making, TEEB (The Economics of Ecosystems and Biodiversity) has published a report emphasizing maintenance and enhancement of wetlands as a key element in a sustainable economy.

If the values of water and wetland ecosystem services are not conveyed in terms understandable and acceptable to those who make decisions, there is a serious risk that these services will be degraded or lost, the report reads.

Without wetlands, the water cycle, carbon cycle and nutrient cycle would be significantly altered, according to the study, TEEB For Water and Wetlands, which is a main reason the priority of the report is to integrate the restoration and conservation of wetlands into water management. The report also says wetlands support climate mitigation and adaptation and helps alleviate poverty by providing local livelihoods.

Outside of the report’s overall emphasis on the importance of wetlands, the study is broken into chapters on the three issues it believes to be fundamental in creating a valuation system for wetlands-improving the measurement and assessment of wetlands, integrating their value into decision-making and transforming the current management approach to wetlands and water.

In order for there to be better governance of water, assessments and measurements of water must also improve, the report says. It looks at qualitative, quantitative, spatial and monetary approaches to properly assess the benefits derived from healthy wetlands.

Figuring out the monetary value can help in developing different strategic purposes for the wetlands. It can be used in projects like carbon storage or creating a water fund. In South Africa, for instance, the Mhlathuze municipality underwent a catchment assessment that highlighted the free ecosystem services like nutrient cycling, waste management and water supply. They estimated the monetary value of the services at nearly US $200 million. The municipality then created a management system that supported the region’s biodiversity and development only in areas that wouldn’t have a negative impact on the ecosystems.

Another example is the reduction in nitrogen in the Neuse River watershed in North Carolina that led to an increase in blue crab fishery. The reduction was valued at $2.56 million, the report reads.

Qualitative analysis looks at the non-numerical elements of wetlands such as scenic beauty and spiritual and cultural benefits while quantitative data records hard numbers like the availability of groundwater and the amount of nutrients in a watershed. Geospatial mapping can build on this information by linking it with geographic areas and creating models which new methods of management can be based off of.

For example, InVEST-a family of tools that maps and values ecosystems-helped assess the nutrient and water retention, water yields and purification in the Yangtze River basin in China.

Understanding the value of wetlands’ services is just the first step of integrating them into decision making. The next step, the TEEB report says, is to adopt multidisciplinary management approaches that will ensure water, food and energy security, mitigate and adapt to climate change and alleviate poverty. The Integrated Water Resource Management (IWRM), Integrated Coastal Zone Management (ICZM) and Maritime Spatial Planning (MSP), are three new approaches the report discusses that use a variety of tools as well as engage stakeholders at different levels.

Recognizing synergies between these different sectors will help provide solutions. In the Pangani River Basin in Tanzania, IUCN (International Union for the Conservation of Nature) developed a project under the IWRM approach that included, among other elements- participatory governance, increased knowledge of water resources, empowerment of water and open dialogue for stakeholders.

The project led to water users’ better understanding of the water sector’s vulnerability to climate change as well as water’s social and economic factors. Through the open dialogue and participatory governance objectives, water users also are more involved in climate adaptation activities.

Peoples’ involvement in the process is fundamental, the report says. Often, people don’t realize the impact of goods and services on a wetland because the cost isn’t integrated into the price consumers pay. To account for this gap, there are Market-Based Instruments (MBIs) such as Payments for Ecosystem Services, quality-based instruments as well as taxes and charges on pollution. The report examines these instruments, which would incorporate the loss of a wetland’s value from the production of a good or service.

Another successful PES occurred in France and was organized by the mineral water company, Vittel. The company paid upstream farmers to practice sustainable agriculture. Prior to the PES, the region’s water was full of nitrates and pesticides from intensification farming threatening Vittel’s business.

A government could also consider using an environmental tax, which would encourage polluters to reduce their environmental impact, the report says, while providing a funding source for environmentally friendly solutions.

The report does note, however, that MBIs are often less accepted than technical regulations by the public and can generate political opposition.

The knowledge and tools mentioned above are needed for a transition in water management that enhances conservation and restoration of wetlands. The report notes the linkages between wetland conservation, restoration and poverty alleviation. Restoring degraded wetlands can provide economic stability for local communities with healthy ecosystems that may provide viable fisheries or businesses like sustainable tourism.

The transition must be made carefully and take into account all stakeholders’ needs. The report mentions how several Latin American regions are implementing water funds. The Northern Andes’ ecosystems are under threat from conversion to crop and ranch land and a growing population that will require more resources. But farmers and ranchers depend on the land and resources for their livelihood. Therefore, the process to creating a water fund must inform and engage all stakeholders so they understand the long-term benefits for the environment and for themselves.

Stakeholder engagement is a key part of the report’s solution. Together with collective action between governments, NGOs and businesses, stressing the message of wetlands’ high economic value, they can push the importance of protection and restoration of wetlands to decision makers and into policy.