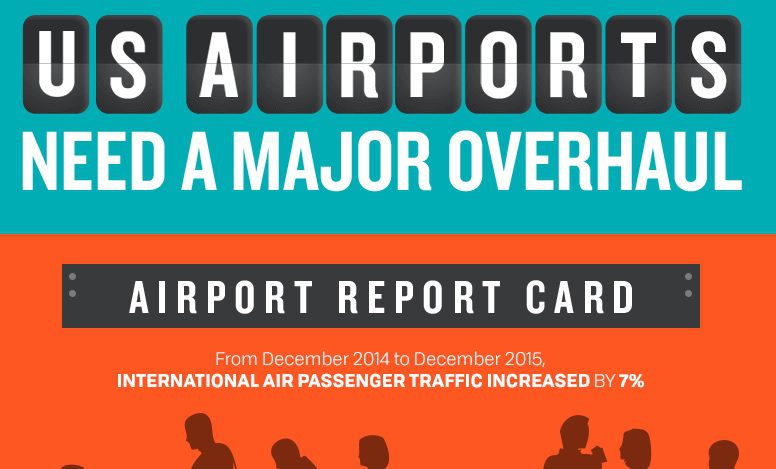 American airports are in dire need of huge infrastructure investments in order to keep up with the rising passenger traffic as well as comply with industry standards and regulations. The urgent need to improve airport infrastructure across the country becomes glaringly evident during major holiday seasons such as Christmas and Easter when American airports tend to be packed with both local and international travelers. Below is a detailed look at this topic.

To learn more, checkout the infographic below created by New Jersey Institute of Technology’s Online Master of Science in Civil Engineering program.

Click on the below link to view the Infographic:

The number of international passenger traffic transiting through US airports grew by 7 percent from December 2014 to December 2015. This traffic includes 50 percent of passengers booked on US airlines. Sadly, the state of American airports can be best described as less than stellar. In fact, The 2013 America Infrastructure report card returned a rating of “D” on the country’s airports. The only way to address this problem is by upgrading airport infrastructure. Sadly, the funding set aside for this purpose is inadequate meaning passengers will continue to experience delays and congestion in the near-to-mid-term future. Currently, only $34 billion is earmarked for airport infrastructure upgrade through 2020. What’s more, this figure is forecast to rise to only $63 billion by 2040. These funding levels are clearly inadequate when you take into account the tens of airports that dot the American landscape and rising air traffic. According to the current performance metrics of the National Airspace System (NAS), the Federal Aviation Administration (FAA) requires 88 percent of flight arrivals to be on time. In the event of a delay, it should not exceed 15 minutes. With this in mind, the top five airports in domestic passenger traffic include the Los Angeles International Airport (LAX) in Los Angeles, CA, Miami International Airport (MIA) in Miami, FL, John F. Kennedy International Airport (JFK) in New York City, NY, O’Hare International Airport (ORD) in Chicago, IL and Newark Liberty International Airport (EWR) in Newark, NJ.

The State of US Airports

American airports are crumbling because infrastructural funding fell by almost half from $21 billion in 2004 to just $13 billion in 2014. While this funding decrease is troubling, it has not raised eyebrows because most of the affected airports handle domestic passengers who are not heavy spenders. This troubling state is captured well by the Skytrax ranking website where the only US airport listed is Denver International Airport at number 28.

According to the National Plan of Integrated Airport Systems (NPIAS) 2013 to 2017, airport delays indicate that passenger traffic is about or has already exceeded throughput capacity. Delays can be broken into three major categories: average peak hour delays, average annualized delays, and average delay associated with weather events. This categorization is based on US DOT airline data from the Bureau of Transportation Statistics (BTS). Currently, delays that do not exceed five minutes are deemed tolerable, whereas a delay spanning ten minutes or more is problematic and may warrant further action. If a delay lasts more than 20 minutes, the affected airport is considered to be facing a serious gridlock.

Although the issues discussed above may seem insurmountable, they are resolvable provided the authorities in charge take the necessarily corrective measures. To start with, infrastructural investments worth $75.7 billion are required by 2019 to ensure that airports can cope with growth in passenger and cargo traffic. Since these funds may not be readily available, privatization could inject the funds required to keep up with air travel demand. At this point, it is worth noting that airport privatization can take different forms including service contracts, management contracts, developer financing/operation, and long-term lease or sale. In fact, you can think of these options as ranging from the least to the most privatization-centric. In this case, service and management contracts are the least privatization-centric while developer financing/operation and long-term lease or sale are the most privatization-centric.

The TFDM is beneficial to multiple parties including the airline industry, passengers, as well as air traffic control (ATC). Here is a look at how the TFDM can benefit each of the aforementioned groups.

Airline industry benefitsFirstly, the Terminal Flight Data Manager enhances real-time information exchange between different players in the airline industry. What’s more, it enables airport authorities/operators, air traffic controllers, and personnel at ramp towers to access more accurate and up to date information. This ensures operations at busy and congested airports run smoothly. This is in addition to reducing the risk of incidents and operational conflicts.

On the flying public front, TFDM systems have improved boarding and flight experiences significantly. In particular, they allow passengers and aircraft crew to wait for their flights inside airport terminals instead of lining up and clogging taxiways. Besides this, the Terminal Flight Data Manager has proven quite effective at scheduling departures, arrivals, and gate information more accurately. Without such a system, airport operators would be forced to rely on lesser effective tools.

Airports in the US are facing a multitude of challenges that must be addressed urgently to make flight experiences more pleasant. However, this may be difficult since most airports are facing funding shortfalls that are expected to last through 2040. Luckily, strategies such as privatization and data-driven monitoring of passenger and cargo traffic can help airport operators to resolve these issues. Airports that leverage the power of the Terminal Flight Data Manager streamline operations and provide accurate information to air traffic controllers and the flying public as well.