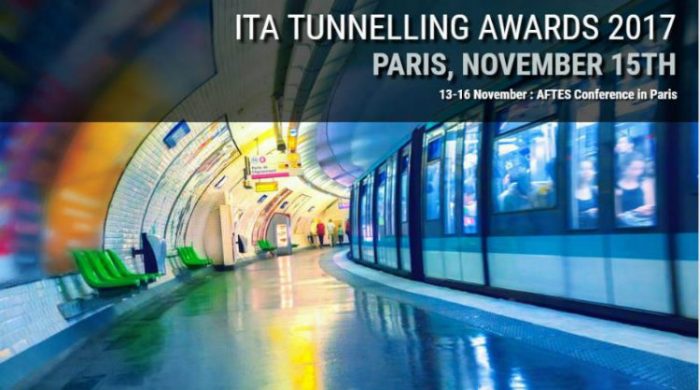 November 13-16 2017 will see leading international specialists in the global tunnelling sector attend the AFTES Congress in Paris which will include a special one-day event: November 15 will be dedicated to the presentation of the shortlisted projects, followed by a banquet and the ITA Tunnelling Awards ceremony.

Several months prior to this event, judges scrutinise candidate applications to select a list of finalists for each of the nine categories.

This year, the event takes place in Paris, an appropriate location given that the French capital was one of the first cities to have exploited underground space as a catalyst for development. Today, the city boasts more than 300km of tunnels.

Technical Project Innovation of the Year:

Sustainability Initiative of the Year:

Safety Initiative of the Year:

Young Tunneller of the Year:

With a total output of €86bn, the global tunnelling sector continues to flourish. But what is the situation in France?

Line 15 will be entirely underground and will comprise the excavation of 75km of tunnels; Line 16 will be 25km long, including 5.5km in common with Line 17 which will be 27km long and have nine stations, while the 35km-long Line 18 will have 10 new stations.

The majority of the tunnels will be TBM-bored through Paris basin sediments at depths of between 15-55m below the surface and advancing at rates of 10-12m/day. Up to seven TBMs will work simultaneously on Line 15 with spoil transported down the Seine. Five machines will work simultaneously on Nos 16, 17 and 14 with spoil transported down the Saint Denis canal. Work began in 2015.

The exploitation of underground space in France stretches back as far as ancient times, specifically in Paris. The first sewer system was set up during the Roman era along a route that is today the Boulevard Saint Michel.

However, the notion of ‘underground space’ as a fundamental component of the city only really began to emerge in the 18th century. In 1777, the creation of ‘the general inspection of quarries’ (IGC) sought to map and catalogue the underground galleries of ancient quarries and thereby help understand areas of potentially unstable ground. At the same time, catacombs were created in order to relieve slum cemeteries.

Later, in the 1930s, the French-Armenian architect Utudjian first introduced the concept of ‘underground urbanism’ to promote the usage of underground space.

Organised by the French Association of Tunnels and Underground Space, this international three-day event will attract specialists from the underground space sector globally: experts, architects, civil engineers and urbanists will promote the underground as the new frontier and generate ideas on how it can shape and enhance our future.

November 13 – 15: an international fair (130 exhibitors) will take place at Palais des Congrès (Porte Maillot), including technical conferences and jobsite visits organised around the central theme of ‘Underground Space: our wealth’.

The International Tunnelling and Underground Space Association (ITA) is a non -profit and non-governmental international organization, which aims at promoting the use of underground space as a solution to sustainable development. Founded in 1974 and operating out of Lausanne, Switzerland, ITA currently associates 73 Member Nations, 300 affiliated members, 17 Prime Sponsors and 60 supporters.