/ Water / Saving A Baltic Sea Island Paradise From Its Own Popularity

Saving A Baltic Sea Island Paradise From Its Own Popularity 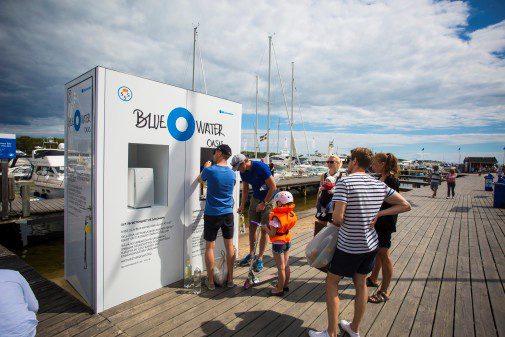 The Royal Swedish Yacht Club has teamed with Bluewater, a world leader in residential water purification technologies, to throw Sweden’s beautiful Baltic Sea island of Sandhamn a lifeline to help save it from acute water shortages and marine pollution. The yacht club and Bluewater today opened a game-changing public hydration station that turns Baltic Sea water into great-tasting drinking water and provide free drinking water on demand to the thousands of visitors who flock to the island during the long summer months.

An acclaimed summer beauty spot and yachting mecca in the Stockholm archipelago, Sandhamn suffers acute water shortages every summer as its permanent population of 90 is swamped by hundreds of thousands of visitors who put huge pressure on groundwater resources.

“Sandhamn, a highly popular destination for KSSS members during the summers months, suffers an acute water shortage and we decided to find a way to leverage water from the Baltic Sea.” said Magnus Woxén, head of operations at KSSS. He said Bluewater was the only company that had the technology to turn brackish Baltic Sea water into fresh drinking water.

“Thanks to Bluewater’s patented, second generation reverse osmosis technology we can now offer visitors to Sandhamn the chance to drink as much water as they want without having to place any demand on local resources – or have to rely on single use plastic bottles of water.”

Bluewater’s compact water purifiers remove up to 99% of most known water contaminants such as toxic metals like lead, chemicals, pharmaceutical residues, and micro-organisms down to 0.0001 microns (500,000 times tinier than the diameter of a human hair), while using around 80 percent less water than a traditional RO water purifier to flush out contaminants.

Bluewater caught the attention of KSSS after the company successfully helped Swedish America’s Cup Challenger Artemis Racing turn harvested rain water at its base on Bermuda into drinking, cooking and washing water for the 100 athletes and support staff. Eighteen months ago, the company also donated two of its powerful Pro water purifiers to the American town of Flint in Michigan, which saw its tap water poisoned by extremely high levels of lead.

“The Bluewater Pro can generate up to 5.7 liters per minute of clean, fresh water direct from the Baltic, uses little energy and is very compact, which makes them ideal for use by summer home owners and communities in places like Sandhamn that suffer acute water problems,” said Bengt.

Committed to leveraging human ingenuity to find solutions to the problems threatening the planet’s environmental wellbeing, Bengt is deeply concerned about the levels of plastic now found in all oceans around the world. With micro plastics in the stomachs of almost one in three mackerel caught in the Baltic, according to Stockholm University’s Baltic Sea Centre, Bengt has made delivering clean drinking water and tackling ocean plastic pollution a cornerstone of Bluewater’s business mission.

“Sweden is famed around the world for being a clean country, yet the Baltic suffers from unacceptable plastic waste and other pollution as well as a growing shortage of drinking water. As concerned individuals and businesses,we need to use all our ingenuity to protect both water resources and marine environments,” said Bengt Rittri.

“KSSS wants to minimize any negative impact our activities may have on the environment by continuously looking for new ways to drive sustainability and environmental awareness,” says Stefan Rahm, the club head at KSSS. “Our sustainability efforts embrace working with partners such as Bluewater, a company providing technology designed to reduce environmental impact by protecting out water assets and cutting the need for single use plastic water bottles.”

Fast Facts about Marine Pollution in the Baltic

– Up to 40 tonnes of micro-plastics – particles <5mm in diameter – are released annually into the Baltic Sea catchment area through the use of products like body wash, shower gels and scrubs, according to the Baltic Marine Environment Protection Commission, HELCOM (https://goo.gl/iHfTZL)

– HELCOM says Scientific studies show that micro-plastics can bringserious harm to the marine environment and its inhabitants. When in water, micro-plastics act as magnets, attracting and carrying bacteria and various contaminants that ‘colonize’ the particles.

– Around 130 tons of polyethylene particlesfrom personal care products are flushed downthe household drains in the Baltic Sea catchmentarea each year, according to HELCOM.