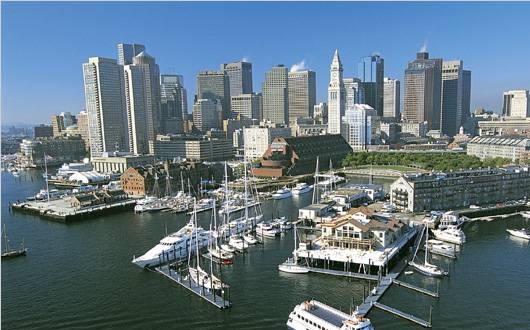 The Boston Harbor Association today released Preparing for the Rising Tide, a report detailing Boston’s vulnerabilities to rising sea levels and describing how commercial property owners and public agencies can prepare for predictions of sea levels higher than today’s by up to two feet by 2050 and up to six feet by 2100.

Had Hurricane Sandy’s storm surge hit Boston five and a half hours earlier at high tide, instead of at low tide, the city would have experienced a “100-year coastal flood,” that could have flooded approximately 6 percent of its land area, including portions of every coastal neighborhood and the Harbor Islands. Once sea level rises five feet—which could possibly occur before 2100— Boston will experience this “100-year coastal flood” as the twice-daily high tide.  At that sea level, even a moderate storm surge of 2.5 feet could result in more than 30% of Boston flooding, with East Boston experiencing the most extensive flooding.

The report’s authors include leading climate scientists, who developed case studies describing how property owners on Boston’s Central and Long Wharves and the UMass Boston campus can assess and decrease their vulnerability to coastal flooding over time.  Building on the City of Boston’s Climate Action Plan and developed in coordination with many of Boston’s coastal commercial property owners and members of the Boston Green Ribbon Commission, the report also makes broader recommendations for accelerating Boston’s preparedness for, and resilience to, rising sea levels and coastal flooding.

“It was sobering to realize how climate change is already putting Boston’s waterfront at risk,” said Vivien Li, president of The Boston Harbor Association.  “Hurricane Sandy was a wake-up call.  This report helps turn apprehension into tangible actions for businesses and government.”

Coastal flooding can be devastating to both buildings and infrastructure—damaging equipment, causing public health and environmental problems and resulting in loss of use for extended periods of time. The Mass Bay Transit Authority’s Aquarium Station entrance, for example, lies only 2.5 feet above today’s average high tide.It may need to be either raised or moved soon after 2050 to avoid frequent tidal flooding.Several of Boston’s large properties essential to regional commerce may also be at risk of increased storm flooding soon after 2050: Logan Airport, the Boston Convention and Exhibition Center, the Seaport World Trade Center and the Conley container port terminal. Other large at-risk properties include the New England Aquarium, Harvard Stadium and the Bayside Expo Center.

“This report shows us where we stand and what more we need to do in preparing for the effects of climate change and rising sea levels in Boston,” Mayor Thomas M. Menino said. “I look forward to the work ahead with Boston residents, our business community, and The Boston Harbor Association, as we continue to make Boston as resilient as possible.”

Bryan Koop, senior vice president and regional manager at Boston Properties, said, “As an owner of coastal commercial real estate properties, it’s important to Boston Properties to be able to plan for the future and to make cost-effective improvements that will reduce our facilities’ susceptibility to flooding damage.”

Among the report’s recommendations:

For the executive summary and full report, visit: http://www.tbha.org/preparing-rising-tide-report.

Founded in 1973, The Boston Harbor Association has been instrumental in promoting the clean-up of Boston Harbor and in ensuring waterfront public access and public amenities along the harbor. TBHA is dedicated to addressing the challenges of climate change for a vibrant Boston waterfront.