/ Electric Grid / Per Capita Residential Electricity Sales in the U.S. Have Fallen Since 2010

Per Capita Residential Electricity Sales in the U.S. Have Fallen Since 2010 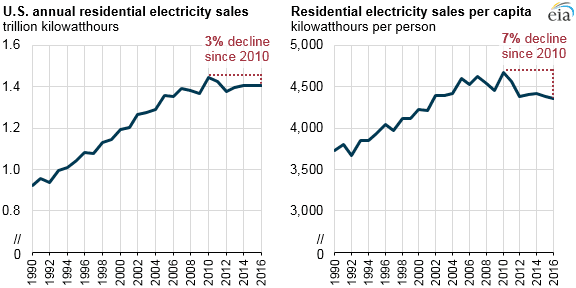 Several of the states with the highest residential electricity sales per capita, such as Alabama, Louisiana, and Mississippi, are in the South census region, where electricity is more likely to be the main space heating fuel. About 60% of Southern homes heat primarily with electricity compared with 22% outside the South.

Some of the states with the largest percentage decline in per capita residential electricity sales were also those with the largest changes in winter weather between 2010 and 2016. Southern states such as South Carolina, Georgia, and Alabama had 25% to 30% fewer heating degree days in 2016 compared with 2010, and each saw double-digit percentage declines in per capita residential electricity sales. 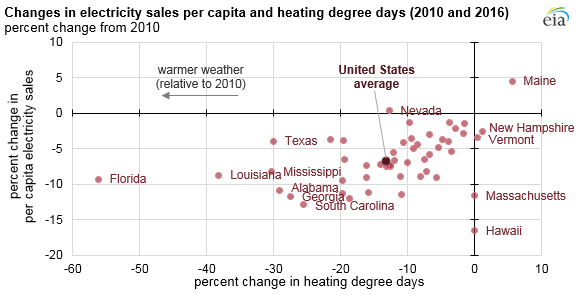 Rapid growth in the adoption of small-scale solar photovoltaic (PV) systems in states such as Hawaii and California has contributed to the recent decline in some states’ retail electricity sales. Small-scale solar PV systems, often installed on residential rooftops, offset the amount of electricity that consumers need to buy from the electric grid. In 2016, residential distributed PV generation was equivalent to 15% of electricity consumption in the residential sector in Hawaii, 6% in California, and 3% in Arizona.

Other factors, such as income growth, have affected retail electricity sales, especially in states such as North Dakota. North Dakota experienced significant economic growth as crude oil production from the Bakken region increased from 2008 to 2015. Annual new housing permits in North Dakota increased from fewer than 4,000 units in 2010 to more than 12,000 units in 2014. As the size of new houses increased and residents who experienced rapid income growth likely increased their home use of electricity, per capita residential electricity sales in North Dakota grew by 12% from 2008 to 2014, the most rapid growth in the nation during this time. 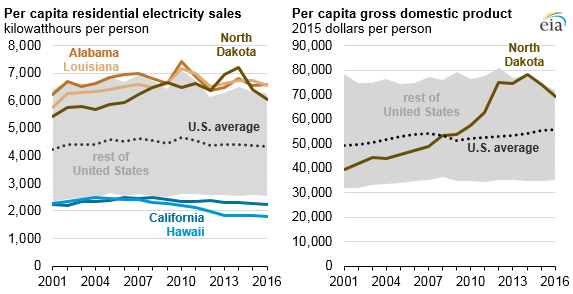