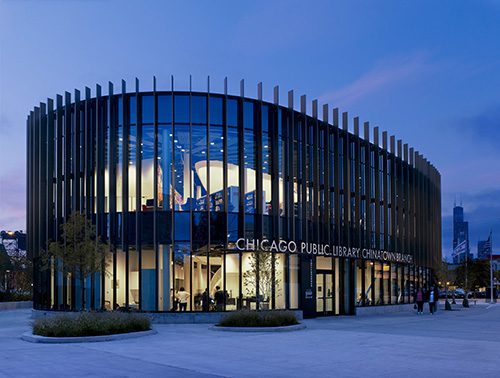 (Chicago, IL) – The Chinatown Public Library in Chicago has earned national recognition in the 2017 Innovative Design in Engineering and Architecture with Structural Steel awards program (IDEAS2). In honor of this achievement, members of the project team will be presented with awards from the American Institute of Steel Construction (AISC) during a ceremony to take place at the library on Wednesday, July 19, at 6 p.m.

“Its rounded form, accented with vertical fins, serves as a beacon for the surrounding neighborhoods,” commented Dave Barista, editorial director at Building Design + Construction magazine, and the trade media juror in the competition.

The two-story, 16,370-sq.-ft building’s interior space radiates from a central atrium, and the main structural beams are similarly arranged on a radius. Round hollow structural sections (HSS) were selected for the columns, as they provided a clean surface where several beams connect into a single point and also facilitated and simplified the non-orthogonal lateral bracing connections.

The 13 IDEAS2 winners for 2017 were chosen from nearly 100 submissions received from architectural and engineering and other project team member firms throughout the U.S. Each submission is reviewed and award winners are selected by a nationally recognized panel of design and construction industry professionals.

The IDEAS2 award dates back more than 50 years with AISC. And about this year’s winning library, Charlie Carter, SE, PE, PhD, president of AISC, said, “Simple in its complexity, this is a beautiful design that blends the art, steel materials, architecture and structure in masterful ways. We are so pleased to be able to recognize the designers and constructors who brought this building to life.”

Members of the media may request high-resolution images of the project by contacting AISC’s Tasha Weiss at 312.670.5439 or weiss@aisc.org. For more information about the IDEAS2 awards and to view all of this year’s winners, please visit www.aisc.org/ideas2. Entries for the 2018 competition are due by October 6, 2017.