/ Energy / Retail Price of Regular Gasoline Forecast to Average $2.38 Per Gallon this Summer

Retail Price of Regular Gasoline Forecast to Average $2.38 Per Gallon this Summer 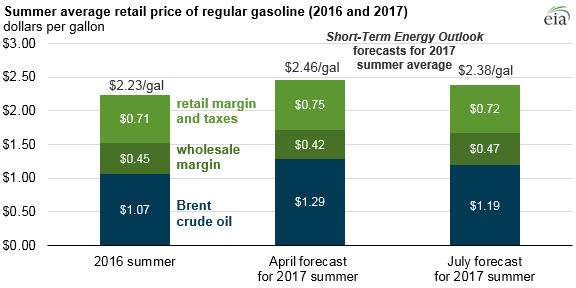 In the latest Short-Term Energy Outlook (STEO), EIA forecasts that the U.S. retail price for regular gasoline will average $2.38 per gallon (gal) this summer (April through September). If realized, it would be the second-lowest summer average gasoline price since 2005. The forecast price for this summer is slightly higher than the 2016 summer average of $2.23/gal but lower than the forecast presented in the April 2017 Short-Term Energy and Summer Fuels Outlook. Changes in the gasoline price forecast since April are largely attributable to decreases in crude oil prices.

EIA now forecasts Brent crude oil prices to average $50 per barrel (b) for the summer driving season, down from a projection of $54/b in the April STEO. Crude oil prices have fallen in recent months as U.S. oil producers have increased drilling activity and production—with many of them hedging at higher oil prices seen in early 2017—and as Libya and Nigeria have produced at levels above expectations. These developments have served to offset some of the production cuts agreed to by members of the Organization of the Petroleum Exporting Countries (OPEC) and some other leading exporters with the intention of reducing elevated global oil inventories.

Gasoline wholesale margins, calculated as the difference between the wholesale price of gasoline and the Brent crude oil price, are now forecast to average 47 cents/gal this summer, compared with 42 cents/gal in the April STEO. Domestic gasoline demand fell by 1.1% through the first four months of 2017, compared with the record level of demand seen in 2016, but still remains 3.1% above the previous five-year average. However, strong demand in export markets over that period has contributed to record-high levels of U.S. refinery output and enabled higher refinery wholesale margins. State and local taxes and retail price margins, the other main components of retail gasoline prices, remain relatively unchanged since the April outlook.

On a monthly basis, EIA expects that gasoline prices reached their summer peak early in 2017 at an average of $2.42/gal in April. For the rest of the summer, EIA forecasts gasoline prices to continue declining to an average of $2.33/gal in September. Declining retail prices are expected to be driven by declining gasoline wholesale margins, which are forecast to fall from 52 cents/gal in June to 38 cents/gal in September. Wholesale margins typically decline toward the end of summer as gasoline consumption falls seasonally.

Although fluctuations are likely, EIA’s forecast for monthly average crude oil prices remains near $50/b for the rest of the summer, as the global oil market is expected to remain relatively balanced in the coming months. Oil price forecasts, even for the near term, are highly uncertain. For example, NYMEX contract values for October 2017 delivery of West Texas Intermediate (WTI) crude oil traded during the five-day period ending July 6 suggest that a range of $36/b to $60/b encompasses the market expectation for WTI prices in October 2017 at the 95% confidence level. The average $2/b premium expected over the remainder of 2017 can be added to WTI’s confidence interval to approximate the market-based confidence interval for Brent.