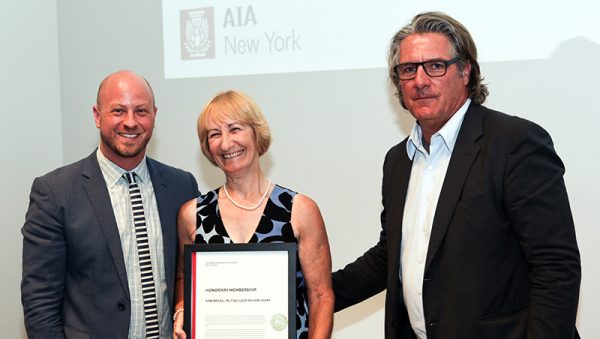 Thornton Tomasetti, the international engineering firm, announces that Vice Chairman Aine Brazil, P.E., F.SEI, LEED AP has been named an Honorary Member of AIA New York, the oldest and largest chapter of the American Institute of Architects. Brazil was recognized during a ceremony on June 20, 2017, at the AIA New York Chapter’s 150th Annual Meeting held at the Center for Architecture in Manhattan.

AIA New York Honorary Membership recognizes outstanding and significant accomplishments by a professional outside of the architecture field. It is awarded to a person of esteemed character who is not eligible for regular or associate membership, but who has rendered distinguished service to the profession of architecture or allied arts and sciences.

• Brazil is widely recognized for her engineering achievements in the United States and internationally. In her 40-year career, she has been responsible for the design and construction of nearly every building type.

• Her portfolio includes such landmark projects as the 54-story Bloomberg Tower, Greenberg Pavilion at New York-Presbyterian Hospital/Weill Cornell Medical Center, and Via 57 West. She has been actively involved in the development of 30 and 10 Hudson Yards as well as the redevelopment of LaGuardia Airport.

• Brazil has garnered dozens of professional awards for her leadership and innovative projects. In 2016, she was presented with the Homer Gage Balcom Award from the American Society of Civil Engineers Metropolitan Section. In 2014, Brazil was named International Engineer of the Year by Engineers Ireland, one of the country’s oldest and largest professional organizations. She was honored as Woman of the Year by WX, New York Women Executives in Real Estate, and Crain’s New York Business named her one of “New York’s 100 Most Influential Women in Business.”

• She also served as a member of the Mayor’s Commission on adopting the International Building Code and as the first president of the Structural Engineers Association of New York.

About Thornton Tomasetti (www.ThorntonTomasetti.com)
Thornton Tomasetti is a leader in engineering design, investigation and analysis serving clients worldwide on projects of all sizes and complexity. Through its 10 complementary practices, Thornton Tomasetti addresses the full life cycle of a structure. We have supported clients working in more than 50 countries, with projects that include the tallest buildings and longest spans to the restoration of prized historic properties. Thornton Tomasetti comprises more than 1,200 engineering, architecture, sustainability practitioners and support professionals who collaborate from offices across North America and in Asia-Pacific, Europe, Latin America and the Middle East.