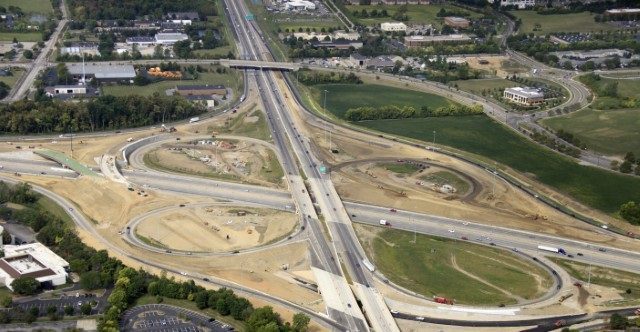 The ODOT/ACEC Awards for Excellence in Highway Design program, a cooperative effort between Ohio Department of Transportation and the American Council of Engineering Companies in Ohio, recognizes the state’s best projects in three categories – structure, rural projects and urban projects.

Under an accelerated schedule beginning in 2013, CH2M served as the Lead Design Consultant for approximately $70 million in improvements to the I-270/US 33 interchange, which had exceeded its original 1960s design capacity by more than 100 percent.

Previously noted as one of the most dangerous in the state, ODOT ranked the interchange in the Top 20 for freeway crashes. In light of these safety concerns and increased traffic demand, the updated design aimed to:

The Phase 1 improvements included widening US-33 from two lanes to four lanes in each direction for approximately 2-miles, and realignment and reconstruction of seven ramps, eight new bridges, three widened bridges and eight new retaining walls. Given the size and magnitude of funding necessary to reconstruct the interchange as a whole, CH2M worked with ODOT to develop a phasing strategy to rebuild the interchange in workable segments over time.

The CH2M team completed the design process in just 14 months, and construction of the Phase 1 improvements reached substantial completion in 2016. ODOT will continue looking at additional Phase 2 enhancements for the interchange, which became the first interchange in the country to use predictive crash analysis methods per the AASHTO Highway Safety Manual during alternative analysis to influence alternative selection.

The I-270/US 33 Interchange project received its award at the ODOT/ACEC Partnering Conference on June 14, 2017.