/ Bridges / Back to the Nest: Falcons Return to Michigan Bridges

Back to the Nest: Falcons Return to Michigan Bridges 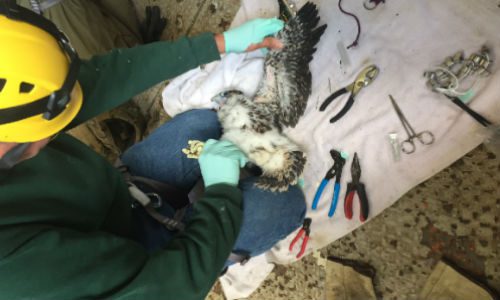 Peregrine falcons have returned to the Portage Lake Lift Bridge between Houghton and Hancock again this year – the same nesting spot, but this year with a choice between new and familiar nests.

The Michigan Department of Transportation (MDOT) installed two nest boxes at the Lift Bridge in 2012 — one each on the north and south bridge towers. A pair of falcons discovered the nesting site the next spring and has raised a total of 12 chicks there. But, in recent years, the Michigan Department of Natural Resources (DNR) has noticed the boxes were showing signs of wear. Enter some enterprising high school students.

“There were a few classes that participated in the design and construction of the nest box,” Filpus said. “Our AutoCADD class worked developing a blueprint for the design of the box based on pictures of others built. Some students in Baraga’s wood shop and construction trades class built the box.”

Filpus said it took the students about a week to learn a little background about falcons and how nest boxes are built, then design the initial blueprint of the box. Building the box took an additional two weeks, with classes working one to two hours per day.

One box was deployed on March 17, just days before the nesting pair returned this spring. The second will be installed before the next nesting season. The new boxes feature tough construction, a trap door in the rear, and a roof that folds down across the front of the box to prevent chicks from falling out during banding operations.

Webcams, viewable at http://pasty.com/nestbox.html, also have been installed in cooperation with the Copper Country Audubon Club to allow people to watch potential nesting activity at both boxes.

“We went ahead and partnered with Pasty.com, an internet service provider in the area,” said Phil Quenzi of the Copper Country Audubon Club. “They provided some of the equipment. Audubon bought the cameras, and the DNR and MDOT helped us out and allowed us to put the cameras on the bridge. The feedback so far has been pretty positive. At this point we don’t have a count of the people who visit the site, but it seems like there are quite a few, locally and from elsewhere, that visit the site. And we’ve gotten a lot of good comments.”

At the other end of the Upper Peninsula, another pair of peregrine falcons successfully nested on the Sault Ste. Marie International Bridge, hatching four chicks this year.

“This site has hatched 24 falcon chicks since 2010, when we put in the nest box and started counting,” said International Bridge Engineer Karl Hansen, “There were more before that but we don’t know the number.” Hansen said a falcon cam for the International Bridge is also planned.

The chicks at the International Bridge were banded by a DNR team on June 19, while the Lift Bridge birds were banded on June 23. They were also named. The Baraga AutoCADD students and MDOT employees settled on naming the Lift Bridge birds Hank, Esther, and Bridgette. In recognition of Canada’s 150th anniversary, this year’s International Bridge bird names honor Canada’s first two men and first two women in space: Marc, Roberta, Steve, and Julie.

Karen Cleveland, a wildlife biologist with the DNR, said biologists try to band as many peregrine falcon chicks as they can at nest sites in Michigan. These color-coded metal bands stay on the falcons’ legs through their entire lives and give researchers a way to find out how long they live, where they travel, and whether they are able to raise chicks of their own.

“Michigan lost its peregrine falcons in the 1960s and 1970s due to the use of DDT and other environmental contaminants,” Cleveland said. “Since conservation efforts started in the mid-1980s, the number of peregrine nests has slowly increased. Now there are about 40 falcon pairs actively trying to nest statewide, with one to two new pairs discovered most years.”

The peregrine falcon has now been removed from the federal endangered species list, but is listed as an endangered species in Michigan, protected by state and federal law. Peregrines have adapted to city habitats, nesting on tall buildings, smokestacks and bridges around the world. Studies have found the birds in this region tend not to nest in the same area where they were hatched, but spread out across the Midwest.

“The restoration of peregrine falcons to Michigan has truly been the result of the work of the DNR with multiple other partners” Cleveland said. “Whether it’s MDOT providing nest boxes on their bridges or more traditional conservation groups, like the National Park Service or Michigan Nature Association, protecting nesting sites on cliffs and ledges, their efforts have helped this species succeed.”

A video news release on falcons and falcon banding at the International Bridge and Portage Lake Lift Bridge are online at https://youtu.be/4DQp0kU4ph4.