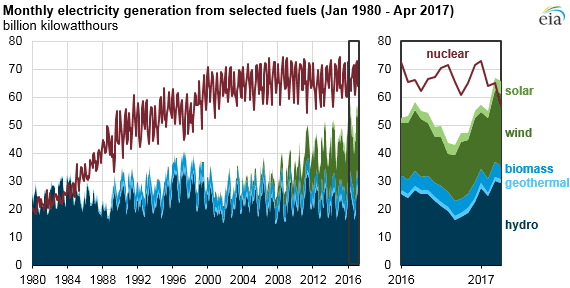 In March, and again in April, U.S. monthly electricity generation from utility-scale renewable sources exceeded nuclear generation for the first time since July 1984. This outcome reflects both seasonal and trend growth in renewable generation, as well as maintenance and refueling schedules for nuclear plants, which tend to undergo maintenance during spring and fall months, when overall electricity demand is lower than in summer or winter.

Record generation from both wind and solar as well as recent increases in hydroelectric power as a result of high precipitation across much of the West over the past winter contributed to the overall rise in renewable electricity generation this spring, while nuclear generation in April was at its lowest monthly level since April 2014. However, EIA’s latest Short-Term Energy Outlook (STEO) projects that monthly nuclear electricity generation will surpass renewables again during the summer months of 2017 and that nuclear will generate more electricity than renewables for all of 2017.

Conventional hydroelectric generation, which remains the largest source of renewable electricity in most months, totaled 30 billion kilowatthours in March, the highest level in nearly six years. Largely because of record precipitation and snowpack in California, EIA’s latest STEO projects an increase of 14% for hydroelectric power in 2017 compared with 2016.

As renewable generation has increased, net generation from nuclear power has remained relatively flat since the late 1990s. Retirements of a number of nuclear plants have resulted in a slightly lower level of overall nuclear generation capacity, and in turn, a lower level of generation.

Unlike generation levels from wind and solar, which follow seasonal patterns that reflect the fluctuations in their resources, monthly fluctuations in nuclear generation largely reflect maintenance schedules. Based on data reported to the Nuclear Regulatory Commission and compiled in EIA’s daily Status of U.S. Nuclear Outages report, an average of 14 gigawatts and 21 gigawatts of nuclear capacity were offline during March and April, respectively, representing about 14% and 21% of total nuclear capacity in the United States.

For a complete list of nuclear plant additions, restarts, and retirements over the past 10 years, see EIA’s Monthly Energy Review.