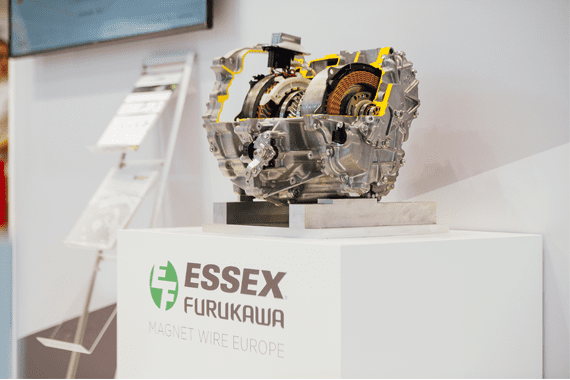 Patrick Schaffus, engagement manager for automotive and assembly at McKinsey & Company, opened day three of CWIEME Berlin 2017 with an overview of the global market for electric vehicles, as well as the factors driving it. A 2016 McKinsey survey revealed that 30-45% of vehicle buyers in the US and Germany would consider an electric vehicle (EV) purchase today.

“This indicates huge potential for the EV market to pick up fast,” Schaffus said. “Furthermore, the next wave of EV owners will have lower incomes than current EV buyers, putting cost pressure on OEMs. OEMs must cover 50% of the electric motor cost and dominate battery packaging and integration if they are to keep today’s value add.”

“The biggest cost of an EV today is by far the battery,” said Dr. Sigrid Jacobs. “In our case as an electrical steel supplier, we help to make the most of the battery energy and power by producing steels with fewer losses. Our customers can achieve a smaller machine that uses less electricity for the same performance.”

Dr. Konstantinos Laskaris, meanwhile, remarked on the role aerodynamics have to play in reducing consumption and, therefore, battery size and cost. “I believe the existing high battery cost has encouraged us to develop much more efficient platforms that were not well appreciated for internal combustion engines because the gas tank has a lot of energy.”

“However, there is no single component that will bring the breakthrough,” said Yves Burkhardt. “It has to be all components working together.”

Frederic Weishaar, president of Essex Europe, added: “This HVW is the first of its kind in the European automotive market and paves the way to a whole new market of innovative magnet wire design.”

A brand new mode of transport

The final day of CWIEME Berlin 2017 closed with a keynote speech from Alex Jedinger, electromagnetic design engineer for Hyperloop One, presenting an entirely new vision of electromobility. Inspired by technology entrepreneur Elon Musk, Hyperloop is a proposed mode of passenger and freight transport where pods travel by electromagnetic propulsion and magnetic levitation through a low-pressure tube at 300 m/s or 1,080km/hr – almost the speed of sound.

Jedinger suggested pods in a German Hyperloop could travel between Berlin and Hamburg in 19 minutes – a journey that takes one hour and 24 minutes by high-speed rail. “In high-speed rail travel, aerodynamic drag is a huge limitation – that isn’t a problem in a vacuum system like Hyperloop,” he explained.

Jedinger described the origins of Hyperloop One, as well as the design and testing process. The system works on the principal of passive electrodynamic suspension – one permanent magnet floats above its own conductor with a second magnet to provide guidance force – and incorporates a 114m-long electric motor.

“Not since the Wright brothers proved their flying machine was real in 1903 has someone demonstrated a new mode of transport. At Hyperloop, we’re gearing up for our own Kitty Hawk moment,” he concluded.