According to the U.S. Geological Survey (USGS), the number of earthquakes east of the Rocky Mountains has increased dramatically since 2009. More earthquakes in these areas have coincided with the increase in oil and natural gas production from shale formations. Seismic events caused by human activity—also known as induced seismicity—are most often caused by the underground injection of wastewater produced during the oil and natural gas extraction process. 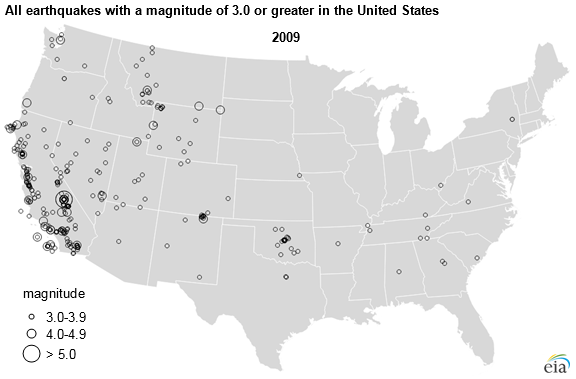 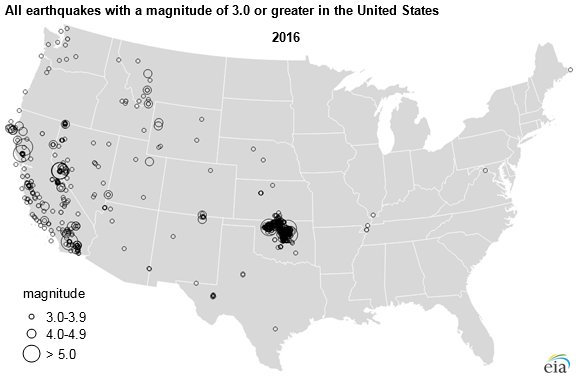 Most induced earthquakes are small, measuring in the three- to four- magnitude range on the moment magnitude scale. These earthquakes are large enough to be felt by most people, but they do not often cause damage to structures. In Oklahoma, where production is in areas with high water-to-hydrocarbon ratios (meaning there is more produced wastewater that must be disposed), the number of earthquakes has increased significantly since 2009.

In addition to the increased use of wastewater injection related to oil and natural gas production in the region, the geologic conditions in central Oklahoma are conducive to triggering seismic activity. The rock underlying the formations where disposal water is being injected in the region has existing faults that are susceptible to the changing stresses caused by fluid injection. Without these geologic conditions, induced seismicity would be much less common. For example, induced seismicity in the Bakken region of North Dakota and Montana is relatively rare. 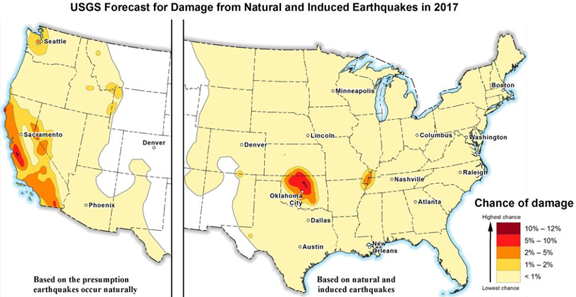 The USGS in 2017 issued an updated seismic hazard forecast for the central and eastern United States. This forecast attempts to estimate the chance of damage caused by earthquakes in the region of interest. The 2017 forecasted seismic rates are still significantly elevated compared with pre-2009 levels but lower than their peak in 2015.

The USGS report indicates that the recent decline may be related to decreased wastewater injection, because production in the region has decreased since the 2014 drop in oil prices. Actions by authorities in various states to regulate wastewater injection practices and restrict injection into the most sensitive areas may also be helping to reduce both the number and intensity of small earthquakes.

Induced seismicity is one of the many topics that will be addressed at the 2017 EIA Energy Conference. The panelists will discuss the evolution of this seismicity, the geology, economics, and regulatory frameworks associated with wastewater injection, as well as the challenges and opportunities related to managing wastewater produced from oil and natural gas production. The panel will be moderated by Meg Coleman, leader of EIA’s Exploration and Production team. Speakers on the panel include

The 2017 EIA Energy Conference will be held June 26 and 27 in Washington, DC. Online conference registration is open through midday June 23.