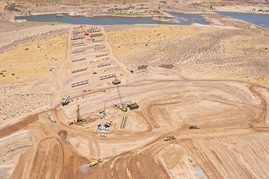 PHOENIX – Less than six months after major construction began on the state’s largest single highway project ever, progress on the Loop 202 South Mountain Freeway has been swift.

In Ahwatukee Foothills, future interchanges are taking shape at 17th Avenue and 40th Street, with columns and abutments in place and crews scheduled to begin placing bridge girders next month. In Laveen, 72 large concrete piers form the start of two half-mile-long bridges that will carry traffic over the Salt River. In the West Valley, work continues to create an interchange with the I-10 Papago Freeway at 59th Avenue, including adding piers that will carry ramps.

This was the goal when the Arizona Department of Transportation greenlighted the state’s first highway public-private partnership to deliver a critically needed transportation project for Valley motorists in a shorter time frame.

Instead of building the final piece of the Loop 202 system as nine individual projects, as originally planned, the 22-mile corridor is being built as a single project. That will deliver the South Mountain Freeway by the end of 2019, at least three years sooner.

“This first-of-its-kind public-private partnership in Arizona will not only save taxpayers’ dollars by reducing the overall cost but enable ADOT to create a much-needed transportation link sooner,” ADOT Director John Halikowski said. “As a result, Valley motorists will reap the benefits when they have another option to travel between the East and West Valley, and traffic flow will improve overall on our regional transportation network.”

Under an innovative agreement announced in February 2016, Connect 202 Partners, a team consisting of Fluor Enterprises Inc., Granite Construction Co. and Ames Construction Inc., with Parsons Brinckerhoff Inc. as the lead designer, is responsible for the design and construction of the freeway corridor and for 30 years of maintenance following construction.

Instead of completing small portions of the freeway and opening them individually, the South Mountain Freeway will open in its entirety when finished, unlike many other ADOT projects. This allows Connect 202 Partners to build the freeway more efficiently and ensure the project remains on budget by not having to tie up resources, personnel and equipment as long.

The only area not under construction is the Center segment, between 51st Avenue and 32nd Lane, where work is scheduled to begin in mid-2018.

The 22-mile freeway will provide a long-planned direct link between the East Valley and West Valley and a much-needed alternative to Interstate 10 through downtown Phoenix. Approved by Maricopa County voters in 1985 and again in 2004 as part of a comprehensive regional transportation plan, the South Mountain Freeway will complete the Loop 202 and Loop 101 freeway system in the Valley.

Visit SouthMountainFreeway.com to stay informed on the South Mountain Freeway project and sign up for updates and weekly traffic alerts to receive notifications of upcoming restrictions and closures.