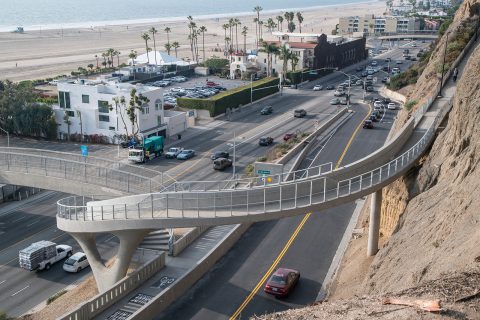 An aesthetic structure with a signature V-shaped pier, the Idaho Avenue POC replaces the former California Incline POC constructed in 1957. Extending from the Idaho Trail in Pacific Palisades Park, the new overcrossing corkscrews tightly around the vertical clearance envelope of the California Incline roadway to connect to a multiuse bicycle/pedestrian path.

Design challenges overcome by TYLI included working with an existing trail with a steep 10% grade; space limitations over the California Incline roadway; the bridge location between steep, erodible cliffs and the City of Santa Monica (City) property line; and a large elevation drop between the popular trail and the roadway. Although the design for the overcrossing was driven by such constraints, TYLI designed the sculptural profile to resemble a nautilus shell, facilitating its connection to the marine environment.

The main architectural feature of the Idaho Avenue POC is the highly curved V-pier on the west side of the roadway, which provides a “window” to panoramic views of the Pacific Ocean and Santa Monica Pier. The design team worked closely with the contractor on this element, providing 3D model files to enable construction of accurate forms. Other aesthetic elements include the transparent, LED-lit cable railing for the cantilevered deck and the graceful transition of the bridge from the trail grade to a code-compliant staircase that progressively widens on the descent.

“T.Y. Lin International joins the City of Santa Monica in thanking the International Bridge Conference for this honor,” said Mark Ashley, P.E., TYLI Senior Vice President and West Region Director. “Our design for the Idaho Avenue Pedestrian Overcrossing addressed significant site challenges, resulting in a uniquely beautiful bridge that provides users with safer, easier access to the beach. We are very pleased that this project has won the 2017 Arthur G. Hayden Medal.”

At the start of the project, TYLI provided a detailed structural assessment report that drove the City’s decision to replace the existing overcrossing. A variety of design concepts were then presented, of which three were chosen by the City for presentation to the general public. Following public selection, TYLI provided final engineering for the preferred alternative.

As an additional benefit to the City, TYLI recommended that the project utilize a contractor that was already constructing an adjacent project. While this accelerated the timeline for the design process, the solution greatly reduced public inconvenience by utilizing existing road closures and detours. The TYLI team also redesigned the Idaho Trail to minimize maintenance and erosion, which had been an ongoing problem for the City. This upgrade included the design of a new trail drainage system.

The IBC is the pre-eminent arena for the bridge industry in North America, Europe, and Asia. Presented each year by the Engineers’ Society of Western Pennsylvania, the IBC attracts over 1,200 bridge owners and engineers, senior policy makers, government officials, bridge designers, construction executives, and suppliers from throughout the United States and abroad. TYLI joined its project partners in accepting the 2017 Arthur G. Hayden Medal on June 6, 2017, at the IBC’s 34th annual conference in National Harbor, Maryland.

Founded in 1954, T.Y. Lin International is a globally recognized, full-service infrastructure consulting firm committed to providing innovative, cost-effective, constructible designs for the global infrastructure market. With more than 2,500 employees working in offices throughout the Americas and Asia, the firm provides support on projects of varying size and complexity. For more information about the company, please visit www.tylin.com.