The North American Electric Reliability Corporation’s (NERC) recent 2017 Summer Reliability Assessment finds that there are enough resources to meet this summer’s projected peak electricity demand in all areas of the country. Anticipated reserve margins, the amount of expected unused electric generating capacity at the time of peak load, range from slightly less than 15% in New England to almost 29% in New York.

In the absence of cost-effective, large-scale electricity storage, reliability of the nation’s electric power system requires that electricity be available to meet demand at any moment. NERC, a nonprofit corporation that oversees regional electric reliability entities in the lower 48 United States, Canada, and parts of Mexico, publishes summer reliability reports that assess existing and planned generating resources, anticipated electricity demand, and other factors in each region.

An important metric of electric reliability is the anticipated reserve margin, measured as the percentage by which expected generating capacity exceeds net internal demand. Net internal demand reflects the total internal demand minus demand-response systems that are expected to be available during a peak demand hour. A reserve margin of 15% means that about 15% of a region’s electric generating capacity would be available as a buffer to meet the summer’s peak hourly load in case of unforeseen generation or transmission outages.

Anticipated reserve margins are highest in the New York Independent System Operator (NYISO) and PJM Interconnection, where reserve margins exceed 28%. Reserve margins that are significantly higher than target levels, although helpful for reliability, indicate the region may have excess underused or unused generation capacity. 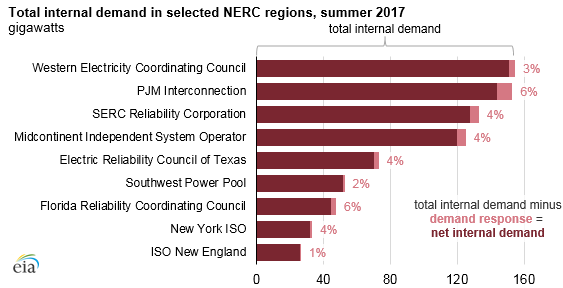 Demand response resources play an important role in electric reliability. Demand response involves the targeted reduction of electricity use during times of high demand. For instance, contracts between utilities and customers may allow power system operators to temporarily turn off some air-conditioning equipment or industrial processes during demand-response events. In return, customers receive incentives for these reductions. Based on data compiled by NERC, demand response resources range from 6% of total internal demand in areas such as the PJM Interconnection and Florida Reliability Coordinating Council to 1% in ISO New England.

Comments are disabled
NEXT ARTICLE
May – June 2017 Table of Contents
June 8, 2017
PREVIOUS ARTICLE
Only Thing Moving on Highway 1 is Dirt
June 8, 2017