/ News / Only Thing Moving on Highway 1 is Dirt

Only Thing Moving on Highway 1 is Dirt 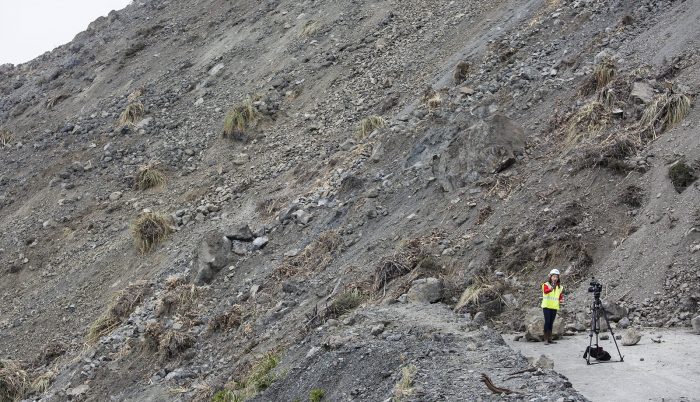 Yet another stretch of Highway 1, that improbable serpentine artery hemming the continent’s western edge, had abruptly disappeared.

No one in the room was shocked. The scientists and builders knew what they were up against.

A week earlier, sensors in the mountains had picked up increased ground movement at a site 10 miles north of Ragged Point.

On May 20 at 9:30 a.m., a hillside near a small ravine known as Mud Creek collapsed, sloughing an estimated 1.5 million tons of rock and mud — about a million cubic yards — over the highway and into the ocean.

The landslide was a third of a mile wide and 40 feet at its deepest. What once was a steep drop into the Pacific was now a broad, sloping bench extending almost 250 feet beyond the shoreline. By some estimates, the collapse had added 15 acres to the coast, a little more than 11 football fields including the end zones.

And the worst might not be over, said inspectors who had just returned from the slide. Listen closely, and you’ll hear water running like rain through the rocks and dirt. The slide at Mud Creek is still moving.

“This is a big one,” said Rick Silva, a California Department of Transportation engineer who had phoned in for the meeting. “It might be a once-in-a-career slide.”

But Silva and the gathered geologists and engineers were unfazed.

Their worst-case scenario had always been the 1983 slide that buried Highway 1 near Julia Pfeiffer Burns State Park for 14 months with 4 million cubic yards of rocks and dirt.

This one might pose even bigger problems, but now they’re more familiar with these notoriously temperamental mountains. And they’re confident they will once again succeed in carving a new route through the rubble, opening the coast for businesses, residents and the million annual tourists drawn to its hairpins and panoramas with a bucket-list fervor.

It will take time though.

This year’s battle for Highway 1 began in January after a series of storms pummeled the Central Coast and saturated the Santa Lucia Mountains. By midwinter, some stations had reported up to 83 inches of rain.

In early February, Caltrans, the agency responsible for maintaining Highway 1, noticed the first major problem: The ground beneath the Pfeiffer Canyon Bridge in the Big Sur River valley had begun to slide and undermine a concrete column’s foundation.

Four days later, the slumping bridge had to be condemned. The tightknit community of Big Sur was suddenly divided.

After a deluge that arrived over the Presidents Day weekend, the agency encountered two problems of an entirely different scale to the south on either side of Limekiln State Park.

Here, cliffs rise at near-right angles to the highway, which is protected by giant skeins of webbing that catch the falling boulders.

Just north of there is a famously troublesome part of the highway known as Paul’s Slide, nearly 1,000 feet where skip loaders and dump trucks have spent years cleaning up the rocks and boulders that periodically hammer the asphalt.

Having studied this particular hillside for more than a decade, engineers were close to finalizing a plan, relocating up to 170,000 cubic yards of material from above the road to a terrace below the road. Then the winter rains began to fall, and the ground began to shift.

By the end of February, the southbound lanes at Paul’s Slide had collapsed, undermined by the water running under the road.

By then, Caltrans had closed Highway 1. Only local residents and special deliveries were allowed through on a partially reconstructed road, only one lane wide.

Ryan Turner, a geotechnical engineer with Caltrans, glimpsed the possibility of massive land failure at Mud Creek weeks before it occurred.

Standing on the shoulder of Highway 1 on a March afternoon, he noted a small fissure in the hillside that had opened up days earlier. Now the highway had sunk four feet.

New springs, freshets of water popping out of the mountain and onto the road, created small gullies almost daily, and mud tainted the blue ocean the color of a café latte in broad eddies circling up the coast.

“It is made worse by water,” Turner said. “Surface water means more erosion, and we have lots of water percolating into the earth, lubricating and destabilizing the soil.”

As he spoke, skip loaders did triage, steadily clearing the dirt and mud. Spotters, their eyes trained on the cliff, blasted air horns to signal an imminent danger if and when more medicine balls tumbled down, thudding to a stop on the road. Some, the size of VWs, had already fallen.

Throughout the spring, Turner and his colleagues have collected information about Mud Creek. They spent days bushwhacking through poison oak, studying aerial photos and radar movements of the land.

“Is the whole land mass moving, or is it just these smaller slides?” he asked. “My experience says something bigger is going on.”

“To improve stability, we must reduce the driving pressure and increase the resisting pressure,” he said, a strategy that informs the long-term fix at Paul’s Slide.

But at Mud Creek, such a fix was not feasible. There was no terrace of land below the road to deposit material removed from above the road, and depositing that material into the ocean was not an option.

The engineers thought they had a solution: a side-hill viaduct, essentially a 1,000-foot-long bridge with consecutive spans running adjacent and at a distance from the cliff, so that any debris would pass underneath the structure.

To explore this option, a drill rig had been brought on scene on the north side of the slide.

Then the ground began shifting anew. And their solution was scrapped.

Caltrans hopes to open north- and southbound lanes at Paul’s Slide in July.

Construction of the new bridge spanning Pfeiffer Canyon is on track for completion later this year, and the Nacimiento-Fergusson Road connection linking U.S. 101 with Highway 1 provides limited access to the coast.

Following last week’s meeting, geologists and engineers are scrambling to learn whether they can expect more failure of the hillside at Mud Creek.

It’s too early to suggest a solution, said a Caltrans spokesman. But that’s a far cry from conceding defeat.