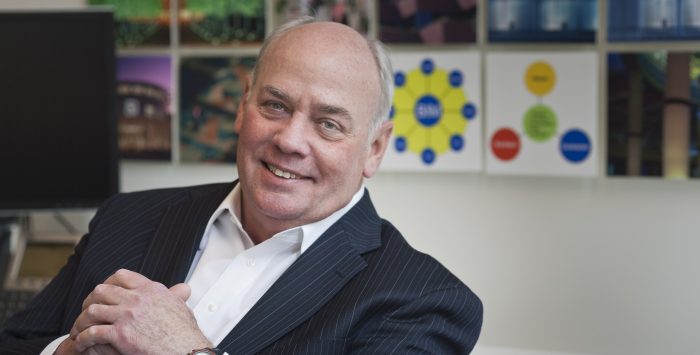 NEW YORK—HOK Chairman Patrick MacLeamy, FAIA, LEED AP, is retiring from the company today on his 50th anniversary at the firm. He will continue as chairman of buildingSMART International, a nonprofit organization dedicated to transforming the design and construction industry that he helped found in 1997.

“Patrick MacLeamy dedicated his professional life to HOK and to improving how our entire industry designs and builds,” said Bill Helmuth, FAIA, LEED AP, chairman and CEO. “He will be forever celebrated for his outstanding leadership and accomplishments. During his 13 years as CEO, from 2003 to 2016, he established the foundation and set the direction for our current success.”

“I am very grateful for HOK, which has provided more than I could have ever imagined—a full career with incredible clients and projects around the world, lifelong friendships and support for great design and innovation,” said MacLeamy. “HOK even hired the architect who was to become my wife, and supported us while we raised a family that now includes three beautiful grandchildren. We will always feel like part of the HOK family.”

MacLeamy joined HOK in 1967 as a designer in the firm’s founding office in St. Louis. He relocated to San Francisco in 1970 to help establish HOK’s first regional office. After serving in leadership roles in design, project management and marketing, he was named managing principal of the San Francisco office in 1983. He joined the firm’s executive committee in 1995 and became chief operating officer in 2000. MacLeamy was elected CEO in 2003 and chairman in 2012. On April 19, 2016, MacLeamy stepped down from his position as HOK’s CEO, with Hellmuth moving to CEO as part of a planned succession process. Hellmuth also assumes the role of chairman.

MacLeamy, a pioneer in leveraging technology to support design quality, is a founder and chairman of buildingSMART International (bSI), a nonprofit organization dedicated to transforming the building industry through the creation and adoption of open, international digital standards for information exchange. By advancing buildingSMART initiatives within HOK, MacLeamy has positioned the firm to accelerate the industry’s adoption of a seamless information exchange network among all team members throughout the facility life cycle.