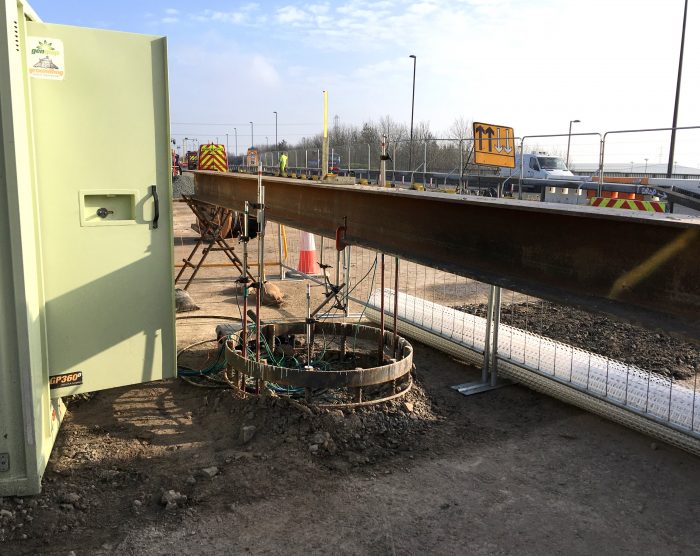 Pile testing by Fugro using the Osterberg Cell (O-cell®) bi-directional technique saved time, reduced safety risks and overcame space constraints during piling for Highways England’s A19/A1058 junction improvements near Newcastle, United Kingdom. A three-tier interchange is being created by the construction of an underpass below the existing A19 roundabout, including three new single-span bridges and slip roads.

Fugro was appointed by Bauer Technologies, the foundation’s contractor for critical structures, to carry out static load tests to verify the piled foundation design for the north bridge, south bridge and central pier.

“Bauer appointed Fugro to carry out pile load tests to verify the capacity of these critical foundations, as Fugro has been undertaking these tests for over 20 years,” notes Martin Blower, managing director of Bauer Technologies.

Work has been complicated by tight access to the three test locations and limited working footprint, with the busy A19 remaining open throughout the scheme. This would have proved challenging for the transportation and erection of test beams or kentledge blocks for a conventional test pile.

Fugro’s O-cell requires little or no space at the pile head during testing. The method offers a safer and more-expedient alternative to traditional top-down methods and performs tests in two directions, with the O-cell assembly positioned between the upper and lower pile elements.

To achieve the required test loads, a single 330-millimeter O-cell was installed in each pile, positioned 1.3-1.5 meters above the base in the Mercia Mudstone deposits. Each pile was proof tested to 1.5 x design verification load (DVL), equivalent to 3.50 meganewtons (MN) for the north and south locations, and 6.15 MN for the central pier.

“O-cell load testing is a key feature of Fugro’s comprehensive services for all types of foundations,” adds Paul Cheesman, operations manager at Fugro. “This method is ideally suited to sites with restricted access such as this, especially where there are safety concerns, because the system loads the pile within the shaft and not above ground. These three working piles were tested soon after installation with minimal disruption to the program. Grouting the O-cells after testing enabled the working piles to be incorporated into the foundation structure.”

Piling started in December 2016 and is due to be finished by the end of 2017. Completion of the project, being undertaken by a Sisk/Lagan joint venture, is expected in March 2019.

Approximately 25 percent of all pile tests undertaken globally with Fugro’s bi-directional O-cell method are carried out on working piles for infrastructure works such as bridges, buildings and skyscrapers.