/ Bridges / A Few Months Before Its Official Opening, Tappan Zee Bridge Is Drivable

A Few Months Before Its Official Opening, Tappan Zee Bridge Is Drivable 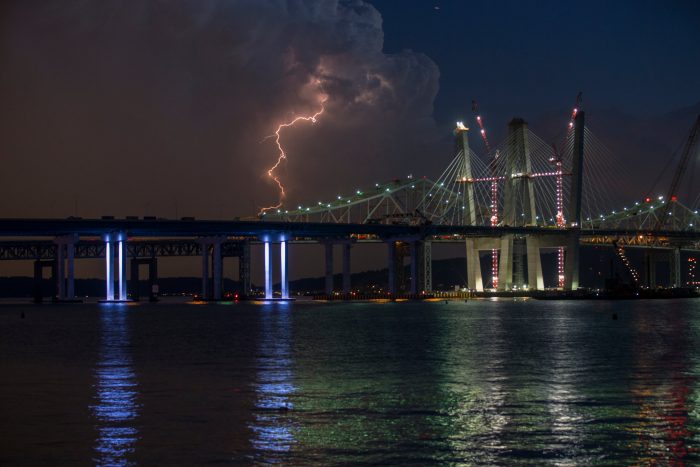 TARRYTOWN, N.Y. — Several months remain before it officially opens to long-expectant commuters, but it is now possible to drive across the entire three-mile length of the new Tappan Zee Bridge, a critical crossing in the suburbs of New York City.

Like beavers steadily piling branches and mud into a dam, hundreds of workers have cobbled together enough of the outward-sloping towers, the radiating cables, the steel framework and the concrete-paneled roadway of the first of twin bridges so that a caravan of large trucks can rumble across without dropping into the Hudson River.

A one-and-a-half-inch coating of state-of-the-art asphalt still needs to be laid down and newfangled accessories, including LED lighting poles, digital message signs and stainless steel fencing to deter jumpers, need to be installed.

But the New York State Thruway Authority, the bridge’s owner, expects that either shortly before or during the fall — four years after construction began — four lanes on this new 96-foot-wide, cable-stayed bridge will be opened to vehicles traveling west from Westchester County to Rockland County. Westchester-bound traffic will still have to use the existing bridge for a few months, but then will share the new crossing with westbound vehicles while workers start taking apart the old decaying bridge.

The old Tappan Zee opened in 1955 and was expected to last a half-century, a shelf life that expired 12 years ago.

The authority considers the new Tappan Zee to be a single bridge made up of two parallel crossings, each with traffic traveling in opposite directions. Before the end of next year the second parallel 87-foot-wide crossing, which is also nearing completion but right now has two yawning gaps left in its steel frame, is expected to open. It will carry four lanes of Westchester-bound traffic, while the first span returns to four lanes of exclusively Rockland-bound cars as well as having space for a separate bicycle and pedestrian path.

When the second crossing opens and the new bridge starts carrying up to 137,000 cars a day, it will essentially mark the completion of the first crossing to be built in the New York area on such a colossal scale since the Verrazano-Narrows Bridge linked Brooklyn to Staten Island in 1964. While it is true that another cable-stayed bridge, the Kosciuszko, opened in April, it is 1,001 feet long and carries traffic over Newtown Creek, not the majestically broad Hudson.

“It’s incredibly gratifying, though every day there are challenges to work through” said Jamey Barbas, the engineer orchestrating the project for the Thruway Authority, as she gazed upon her work from a nearby office window.

Just as delighted is New York’s governor, Andrew M. Cuomo, who set the bridge project in motion after more than a decade of official vacillation over whether money should be spent on repairs or replacement. In an interview, he said he saw the state’s long indecision as a “metaphor for government incompetence and unfulfilled promises,” while the opening of the Tappan Zee’s replacement was a sign that government can still build things.

“It’s a physical manifestation of New York’s spirit of possibility,” he said.

Mr. Cuomo is considered a possible presidential candidate in 2020 and would presumably use his record of building infrastructure — he oversaw the opening of the first phase of the Second Avenue subway, has started overhauls of La Guardia Airport and Pennsylvania Station and unveiled an ambitious renovation plan for Kennedy Airport — as a highlight of his résumé.

Ms. Barbas took me in an S.U.V. from the bridge’s Tarrytown entrance across the 2,230-foot main span onto the water-hugging approach to Rockland County, stopping long before reaching the shore only because workers had blocked off a section to erect a sign gantry. Despite the forklifts, construction trailers, portable toilets, tool chests and piles of steel and rubber parts strewn about and the scattering of many of the 900 hard-hatted, Day-Glo-vested workers putting down the finishing touches, the new bridge was a breathtaking sight.

The eight towers that slope outward like welcoming arms and anchor both bridges to the riverbed are largely completed, soaring the height of 40-story buildings over the river’s gunmetal waters. In the background, as if meant for a traveler’s postcard, lie the end of the emerald-green Palisades bluffs and the houses of Nyack and South Nyack.

The towers, still dressed in scaffolding, are strung with 192 tensioned cables that, like trouser suspenders, hold up the bridge’s main section. The radiating cables look as if they were waiting to be plucked by the fingers of a gargantuan harpist.

About midway across on the main section, an American flag marked the spot where the full length of the steel skeleton was completed on March 25. In its own way, that was a milestone as significant to many travelers frustrated with the current bridge’s chronic traffic jams as the driving of the last spike in Utah in 1869 that completed the transcontinental railroad was to Americans of that era.

Ms. Barbas showed off the bridge’s bells and whistles: the westbound bridge’s 12 expansion joints, which are accordionlike slices of rubber and steel that allow the bridge to expand and contract smoothly with changes in the weather; three “turnarounds,” or ramps, that connect the twin crossings so that traffic can be diverted in case of a logjam or catastrophe; several of the eight gantries that will hold message signs above the roadway to alert drivers to high winds and accidents

Ms. Barbas has been building bridges for 30 years and supervised the reconstruction of the Williamsburg Bridge, but no bridge she has worked on has been anywhere as long or cost more money — almost $4 billion.

Some of the toughest work, she said, involved the cables, composed of clusters of sleek steel strands, each as thick as a climbing rope. They have to be tightened to a fine calibration without being twisted and are encased in white plastic cylindrical sheaths to guard against weather or sabotage.

“The biggest challenge is orchestrating all the different aspects of the work schedule so it’s seamless,” Ms. Barbas said. “It’s almost like a conductor in a symphony. You have to make sure everyone is doing their part.”