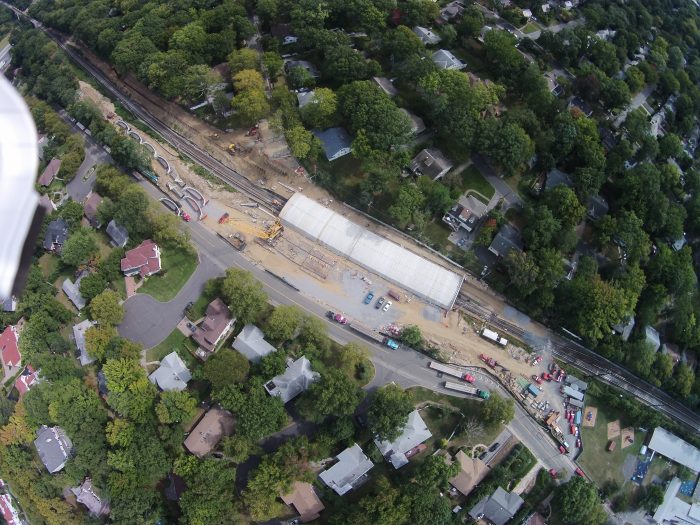 The Long Island Rail Road Company (LIRR) was chartered in 1834, and is one of the few railroads that survived as an intact company from its original charter to the present. Like any transportation network—especially those that have been around for 183 years—LIRR deals constantly with aging infrastructure. In 2015, this was nowhere more true than in the Village of Thomaston on the North Shore of New York’s Long Island. The village’s two-lane Colonial Road Bridge had spanned track for 115 years, well past its design lifecycle, and was considered structurally deficient and in a state of disrepair.

Despite its age, the bridge was not considered historically or architecturally notable, so LIRR decided on a full replacement, rather than rehabilitation, and took the opportunity to make additional major improvements to this section of rail. Ultimately, the $24.9 million “Colonial Road Improvement Project in the Village of Thomaston” would accomplish three major goals:

2. Construction of a new 12-car pocket track to the east of Colonial Road.

3. Improvement of the existing right-of-way to mitigate flooding and drainage issues. Placement of 84 precast arches in two short time windows made this bridge replacement especially challenging. Note the Manhattan skyline in the background. (All photos courtesy of Jason Schreck, GCCOM)

The project, now completed, achieved several major improvements. The pocket track enabled the LIRR to turn trains faster, and it provides better rush-hour service and seat availability from Great Neck and stations west of Great Neck. Rail improvements allow for additional trains to the East Side of Manhattan when the East Side Access Project brings the LIRR to Grand Central Terminal. It allows for better service for special events at Mets-Willets Point, and reduces flooding problems that have often hampered train service in the area. The project also provided immediate safety benefits to the local community as well as an immediate reduction in noise levels for residents living adjacent to the bridge.

Obviously, bridge replacement was the centerpiece of this successful and award-winning project. Replacement of major transportation infrastructure is always a challenge, and here the challenge was increased by tight right-of-ways, dense occupation and development (the site is just 19 miles from Times Square), difficult soils for footings, a skewed roadway alignment, and, of course, the presence of the railroad itself, which needed to stay open as much as possible to serve high volumes of daily Long Island commuters. The finished bridge was a considerable aesthetic improvement over the previous structure.

Precast spans emerged early on as the optimal solution on this design-build project, but adapting this basic technology to the unique challenges of this site required sophisticated design and construction. Ultimately, Contech Engineered Solutions precisely adapted its CON/SPAN O-Series design to create 84 arch units at the LHV Precast Kingston facility and, in a near miracle of logistics, delivered them to staging yards for installation on two shutdown weekends—the only two weekends for which LIRR had approved track shutdown. The stakes were high, and everyone involved is proud that difficult milestones were met on schedule and within budget.

Railroad Construction Company (RCC) of Paterson, N.J., and its JV design partner (KS Engineer & WSP) were chosen by LIRR as the design-build/general contractor.

By 30 percent design phase, Contech’s CON/SPAN O-Series design had been designated as the preferred precast span by HNTB’s New York City office working with LIRR project manager Daniel Knote, but this was hardly an off-the-shelf solution.

“Fitting these arches in the tight geometry available, and matching the radius, was certainly one of our more-complex and challenging projects,” says Contech’s New York Bridge Consultant Dan Logel. Precast arches were subtly pie-shaped so the finished bridge span would follow the track radius.

The 84 arches made by Contech for this project ended up spanning 52 feet, rising 11 feet 2 inches and weighing 21 tons each. And all but two were subtly pie-shaped to match radius.

“In matching the radius of the tracks, we had to be very precise,” notes Logel. “The narrow leg of the precast unit is 3 feet 9 3/32 inches, and the wide side is 3 feet 9 29/32 inches, so there was no room for error. By using the wedge-shaped precast pieces, it allowed the use of a 52-foot span arch rather than a 62-foot span arch while maintaining the same clearance diagram. This resulted in a considerable cost savings for the new 324-foot-long precast structure.”

Bridge footings also were a challenge, due primarily to difficult soils, tight right-of-ways, and nearby buildings and developed property. Initial design called for cast-in-place drilled caissons and lagging, but there were problems. Instead of drilled caissons, the design partners KSE and WSP were able to make small layout modifications that allowed them to design spread footings. This type of foundation allowed RCC to utilize standard construction equipment that was better suited for the track operations and overhead wire concerns.

Constructability was still a challenge, as it had to be performed within the constraint of a single track right-of-way with no suspension of rail service. In fact, the design modifications and the coordination between Contech and the design-build team resulted in the elimination of one proposed weekend track outage, exceeding client expectation and minimizing inconvenience to train riders. The footing’s proximity to private property required an elaborate, braced excavation support system, and abutment stem walls were curved to match the track’s horizontal alignment.

Resolution of the precast arch and footing design were big wins for the design-build team, innovations that worked around major obstacles. But on this project, that wasn’t even the difficult part—that honor goes to the delivery of the 84 21-ton arches, each with a length of 52 feet, to a crowded staging area, in two short time windows.

Contech’s Logel was closely involved throughout this project, from preliminary design to completion, and he makes the arch delivery sound a bit like a military operation.

“Delivery was certainly the challenging part,” he notes. “These large arches were cast by our precast partner, LHV Precast, in its Kingston facility, about a hundred miles from the project site, so just traversing the intervening roadways was tricky.”

To do that, Contech began by securing the services of 42 flatbed trailers rated for loads this heavy—all were about 12.5 feet wide and 60 feet long.

“When you go from Kingston to New York, you have to cross a major bridge across either the East River or the Hudson,” he explains. “That’s not easy; we ended up crossing in the dead of night when traffic was lighter, and of course we had the assistance of the NYPD and other officials, along with the good work of the drivers and escorts. Timing was everything.”

Site delivery and storage was also difficult. “It’s not a big project site, with very little staging area for the trailers, which meant we had to identify and secure trailer parking in the few commercial yards that were nearby,” adds Logel. “In the end, we were able to put 19 trailers on the site, 16 in a nearby site … and the last nine loads were parked on the road because there was just no other place for them.”

By comparison, actual installation was relatively straightforward and went smoothly. “GCCOM Construction Company was hired by RCC to furnish and install the arches, and we could not have done it without them,” notes Schmit. “We couldn’t do actual practice installations because of track restrictions, but we were able to do onsite measurements and months of pre-planning. The weekend shutdown schedule was so tight on the arch installation, but with Contech’s help and experience, we knew we had a realistic plan, with enough contingency time built in.”

In the end, contingency time wasn’t needed. GCCOM was able to set and secure an arch about every 20 minutes, setting 40-plus arches well within the approximately 48-hour track closure times permitted by LIRR.

That smooth, efficient construction was the end result of months of careful planning and extraordinary coordination between designers, RCC, GCCOM and Contech. The project ended up being personally and professionally rewarding for Schmit.

“Working with Dan was certainly the beginning of a good business relationship for RCC and Contech,” he says. “But also, frankly, I feel like I made a friend for life—he really went the extra mile at many points in this project, and made it a successful project for everyone.”

Project recognition was icing on the cake. In March 2017, the “Colonial Road Improvement Project in the Village of Thomaston” was selected by the American Society of Engineers (ASCE) Metropolitan Section as recipient of the “Metropolitan Section Design/Build Project of the Year.” The project also achieved an American Council of Engineering Companies (ACEC) Engineering Excellence Structural Systems Award. Both awards are an extraordinary honor for an extraordinary project.