/ Featured / The Future of Transport is Magnetic

The Future of Transport is Magnetic 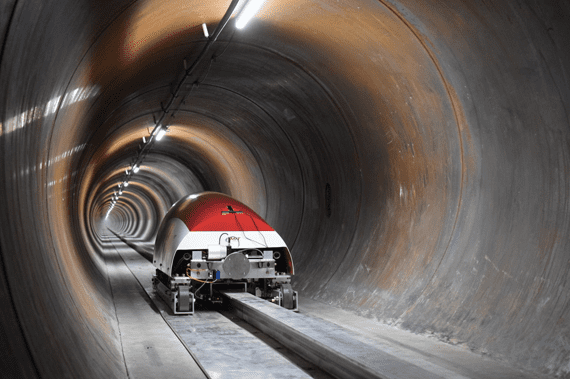 In advance of a CWIEME Berlin seminar, project leaders from two prestigious universities reveal their exciting experiences in developing magnetically-propelled transit pods for the SpaceX Hyperloop.

The idea of creating new high-speed mass transit systems is a hot topic for many scientists around the world. Spurred on by technology engineering entrepreneur, Elon Musk, the race is on to create pods that can transport passengers and cargo at high speeds. Musk – the founder and co-founder of several innovative companies including Tesla (premium electric cars), SolarCity (solar energy supply), and PayPal (online payment portal) – has inaugurated the Hyperloop project with one of his companies, SpaceX. Although SpaceX was originally set up to explore aerospace manufacture and transport, with the ultimate goal of enabling colonisation of other planets, Musk recognised that harnessing the expertise of aeronautical engineers could revolutionise ground transport, and so set up Hyperloop.

The Hyperloop concept is being developed so that pods will travel at very high speeds along a tube, to provide an alternative to flying, rail transportation and driving, while also being safe, convenient and kinder to the environment in not using power that is dependent on fossil fuels. There are several Hyperloop sites being established around the world, and in 2015 Musk launched a competition to encourage the best international student groups to push the boundaries of science and create their ideas of how pods could operate.

Two such top universities – Massachusetts Institute of Technology (MIT, in the US) and Delft University of Technology (TU Delft, in the Netherlands) – took part in the first phase of a competition in January this year to unveil their prototype pods at a Hyperloop test track in California. Challenged with a tunnel of one mile in length and six-feet diameter, the teams had to demonstrate that their pods could safely accelerate to speeds of up to 250 mph and break to a standstill without crashing. Both teams used magnetic levitation as their method of propulsion.

The future of transport innovation

Max Opgenoord, a PhD student who is researching transonic aeroelasticity (the interaction between the aerodynamics and the structural dynamics of aircraft) was the project leader for the MIT Hyperloop team. “It has been an exciting ride,” he says. “When we started with the competition, no one knew what a Hyperloop pod should look like, so we had incredible design freedom. And now, almost two years later, we have demonstrated that a Hyperloop pod can be built. The levitation was definitely the most challenging part of the project, because there were so many options.” 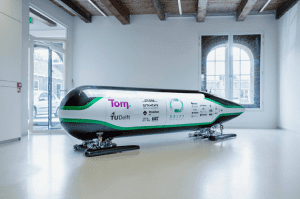 Max Opgenoord, a PhD student who is researching transonic aeroelasticity (the interaction between the aerodynamics and the structural dynamics of aircraft) was the project leader for the MIT Hyperloop team. “It has been an exciting ride,” he says. “When we started with the competition, no one knew what a Hyperloop pod should look like, so we had incredible design freedom. And now, almost two years later, we have demonstrated that a Hyperloop pod can be built. The levitation was definitely the most challenging part of the project, because there were so many options.”

As part of the competition, the rules stipulated that participants from different study areas such as engineering, technology, manufacturing, and business management should work together. Musk realised that in order for innovative ideas to become a realistic proposition for high-speed, low-carbon and scalable mass transit, a practical all-round approach would be needed.

Edouard Schneiders, an applied physics student was on the team for TU Delft’s competition entry. “It was very exciting to take part in this competition – the atmosphere was ecstatic,” he says. “Hyperloop is extremely fast and extremely efficient. It will have enormous social and economic consequences whilst vastly reducing emissions. 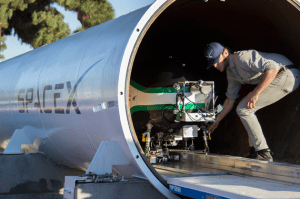 A member of the TU Delft team makes final adjustments of the pod before its test run.

“Transportation has not significantly progressed since the release of the Boeing 747 and the invention of MagLev trains in 1970. The transportation industry needs to evolve and look for completely new solutions like Hyperloop in order to make a real impact.”

Experts from SpaceX and Tesla, along with university professors, judged the competititon entries. The TU Delft Hyperloop team won first prize overall, while MIT Hyperloop won an award for safety and reliability.

At the forefront of technology

Max and Edouard will be leading a workshop at CWIEME Berlin to talk about their ground-breaking designs for the SpaceX Hyperloop competition and the future of transport. Both are excited to see what else is on offer at the show and hear from experts about how technology has a beneficial impact on different industries.

CWIEME Berlin is the world’s leading leading exhibition for coil winding, electric motor and transformer manufacturing, and will welcome more than 6,500 visitors from around the world. With seminar and workshop speakers from disciplines such as design engineering, manufacturing, R&D, procurement, and management, visitors can hear more about the latest trends in electronics, electric motor, transformer, generator, automotive and energy sectors.

Max and Edouard’s session, entitled ‘Next generation/future transportation’, will take place on Tuesday 20th June between 11:45 and 12:35 at the CWIEME Workshop Hub.

“We have a very interesting array of content at the show this year in Berlin,” says Chloe Theobald, global content manager for the CWIEME series. “With guests such as Max and Edouard, from two very prestigious universities, it’s great to see that technology is being used to push forward with some really exciting projects that are creating innovative transportation methods and ultimately be for the benefit of society as a whole.”

Comments are disabled
NEXT ARTICLE
The Future of Construction from DEWALT
June 2, 2017
PREVIOUS ARTICLE
Leaving Paris Sends Wrong Signal, But U.S. Can Still Be Global Clean-Energy Leader if It Prioritizes Innovation
June 2, 2017