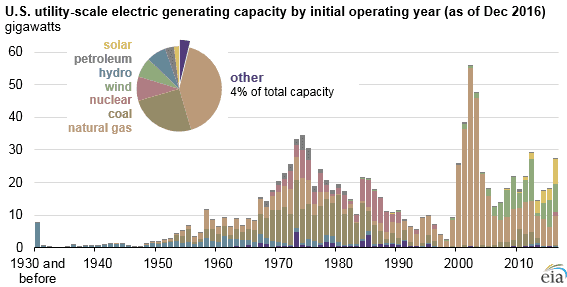 Beyond the main sources of electricity generation capacity in the United States that have recently been discussed in a series of Today in Energy articles, additional amounts of utility-scale capacity are provided by technologies such as hydroelectric pumped storage, batteries, flywheels, and renewable fuels other than hydro, wind, and solar. These sources collectively accounted for 4% of the electricity generating capacity in the United States in 2016.

Wood/wood waste biomass makes up the largest share of biomass technologies, with 10.2 GW of capacity in 2016. Municipal solid waste, landfill gas, and other waste biomass have total capacities of 2.2 GW, 2.1 GW, and 0.8 GW, respectively.

California leads the United States in capacity of several categories: hydroelectric pumped storage, geothermal, landfill gas, and batteries. Florida leads the country in capacity of municipal solid waste and other waste biomass generators. Virginia’s Bath County is the site of the largest hydroelectric pumped storage plant in the United States, at slightly more than 3 gigawatts. All geothermal capacity is located in seven states in the western United States. By comparison, landfill gas and wood/wood waste generators are more common, with generators in 44 states and 32 states, respectively. 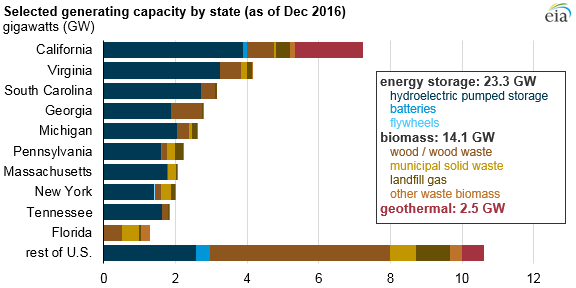 Batteries and flywheels, which provide electricity storage, are among the newest operating units, as almost all of these generators have been added since 2010. Half of the United States’ 540 MW of batteries are in California, Illinois, and West Virginia. Flywheels provide electricity storage through rotational kinetic energy, and almost all of the nation’s 44 MW of utility-scale flywheels are located in New York and Pennsylvania. 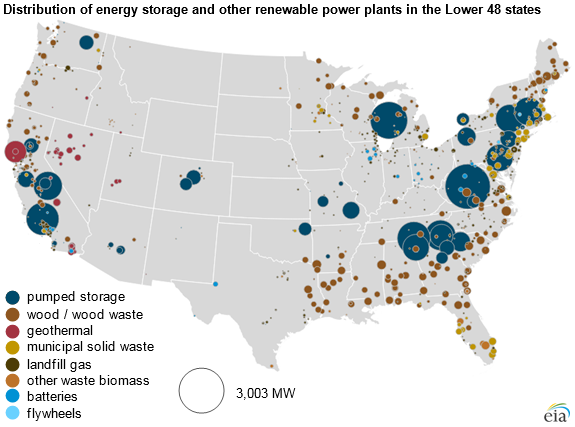 This article is part of a series of Today in Energy articles examining the fleet of utility-scale power plants in the United States. Other articles have examined hydroelectric, coal, natural gas, nuclear, wind, solar, and petroleum generators.