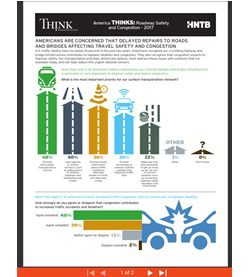 NEW YORK  – As the country hits the road for the long Memorial Day weekend, the latest HNTB America THINKS survey brings new urgency to the nation’s infrastructure debate, finding most Americans have safety concerns when driving on its roads and bridges.

While 92 percent of Americans believe it is extremely, or very important, to maintain existing highway and bridge infrastructure to improve highway safety and reduce congestion, just 35 percent believe their local highways and bridges are extremely or very safe, and 51 percent say they are only somewhat safe, according to the findings of a new national HNTB Corporation America THINKS public opinion survey.

For slightly more than half of Americans (52 percent), the best way to address highway safety is through enforcement of traffic laws, such as those for speeding and drunk driving. Other approaches include encouraging automobile manufacturers to include new safety technologies as standard equipment (45 percent), use of higher safety standards when building or improving roads (44 percent), and 42 percent believe making low-cost improvements such as signage, enhanced pavement markings and guardrails where traffic accidents are prevalent, are some simple ways to improve highway safety.

Almost half (48 percent) of Americans believe providing more public transportation is the best way to reduce congestion. Other ideas include adding capacity to critical corridors (40 percent), providing timely information about traffic conditions, alternate modes of travel and alternate routes was favored by 36 percent, and providing technology, vehicles and roadways that improve traffic flow (30 percent). Making low-cost improvements to get as much out of current capacity was the best option for 22 percent of Americans.

“State departments of transportation are working hard to find and implement solutions that can help decrease congestion, but are hampered by needs outpacing budgets,” said Prasad. “Federal funding identified by the current administration is needed now.”

In 2016, the U.S. was identified as the most congested developed country in the world, according to a study by the research firm INRIX. That study concluded drivers spend an average of 42 hours a year in traffic during peak hours, and calculates total nationwide costs of congestion including fuel, time wasted and freight costs passed on through higher prices—as $300 billion, an average of $1,400 per driver.

Technology is one way out

The survey also found that for more than six in ten Americans (62 percent), the priority for new transportation technologies should be to reduce accidents and increase safety. Almost half of Americans (46 percent) believe the use of connected vehicle technologies will increase highway safety and (45 percent) feel there will be fewer traffic accidents.

The HNTB survey also asked Americans about the technologies they want in their personal vehicles, and more than six in 10 (63 percent) were interested in blind spot notification and 57 percent wanted information on road conditions. The ability to know when vehicles are too close or approaching quickly was cited by 55 percent of respondents. Other technologies chosen were autonomous automatic emergency braking (45 percent), warning that vehicle speed is dangerous for the driving conditions (39 percent) and 37 percent wanted notification of approaching emergency vehicles.

“The need for more transportation funding to rebuild the nation’s infrastructure is emphasized by the D+ grade by the American Society of Civil Engineers’ 2017 Infrastructure Report Card,” said Prasad. “That priority also was apparent from statewide referenda last November, when voters in 34 states agreed to fund local transportation projects. “States are stepping up to the plate and doing their part–we need the Federal Government to do the same.”

HNTB’s America THINKS “Highway Safety, Congestion and the State of Infrastructure-2017” survey polled a random nationwide sample of 1,182 Americans, ages 18 and older, between April 7 and April 10, 2017. It was conducted by Russell Research, using an email invitation and online survey. Quotas were set to ensure reliable representation of the entire U.S. population ages 18 and over. The margin of error is +/- 2.9 percent.