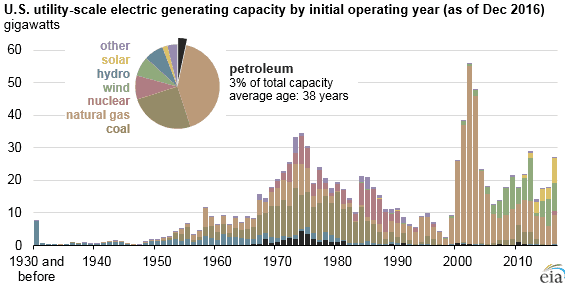 Power plants that burn petroleum liquids (such as distillate or residual fuel oils) are generally used for short periods during times of peak electricity demand. Otherwise, petroleum-fired power plants operate mostly at low capacity factors because of the high price of petroleum relative to other fuels, air pollution restrictions, and lower efficiencies of their aging generating technology. Most oil-fired generators are either turbines or internal combustion engines used to supply power only at times of peak electric power demand or when natural gas prices rise due to local natural gas demand.

A fundamental shift in the perception of oil as a utility fuel occurred during the 1970s when world oil markets experienced sharp price increases. Supply shortages during world events such as the Arab Oil Embargo, the Iranian Revolution, and the Iran-Iraq war also discouraged petroleum-fired electricity generating capacity additions in the United States. 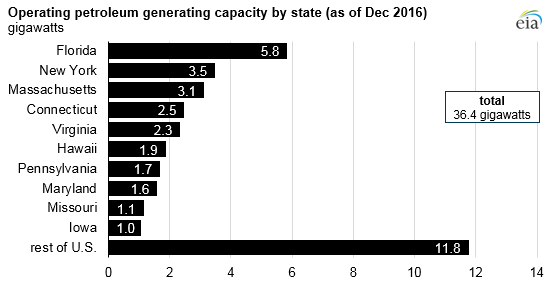 Of the 36.4 gigawatts of domestic petroleum-fired generating capacity, more than 68% is located in 10 states, primarily in coastal states with access to marine ports. When these plants were built in the 1970s, coal-fired generators were the main sources of electricity generation. However, coastal states like Florida are relatively far from coal production areas. Because coal is primarily transported by rail, the cost of long-haul coal transport by rail may not be competitive in these areas compared with oil delivered by marine modes. 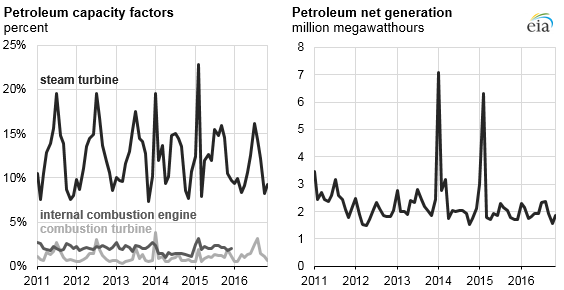 Comments are disabled
NEXT ARTICLE
State of Louisiana Enlists Arcadis to Provide Connected and Autonomous Vehicle Planning
May 19, 2017
PREVIOUS ARTICLE
Leading Utilities of the World Innovation Network is Launched at the Global Water Summit 2017 in Madrid, Spain
May 19, 2017