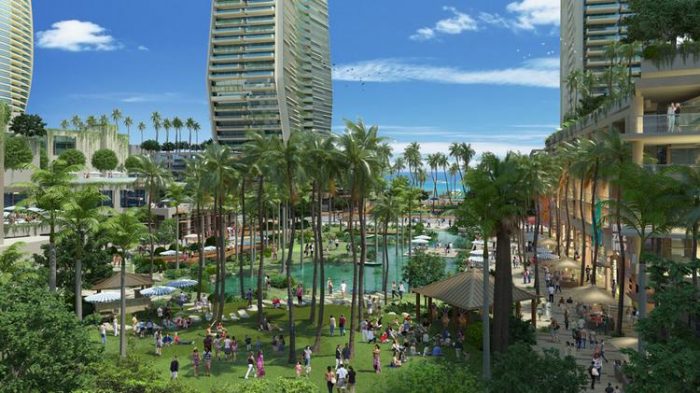 Howard Hughes’ Ward Village was recently named the “Best Master Planned Community in the Nation” by Architectural Digest, which applauded the Kakaako community for its design, materials and location.

“The entire community has been a part of this redevelopment and that effort being recognized at a national level is, simply put, extraordinary,” Todd Apo, vice president of community development at Ward Village, said in a statement. “Ward Village is creating a new way of living in Hawaii, and this emerging trend is beginning to be recognized on a broader scale.”

It also acknowledged the restoration of the IBM building, designed by Vladimir Ossipoff and renovated by Woods Bagot to include local materials and motifs.

So far, there have been six residential towers announced by The Howard Hughes Corp. (NYSE: HHC), which is the largest private landowner in Kakaako.

Most recently, Hawaii regulators approved the company’s plan to develop a 42-story, 751-unit mixed-use condominium called Aalii, which will be located on the route of the Honolulu rail transit project along Halekauwila Street.

The sixth tower will be located next to Aeo, which will include the state’s flagship Whole Foods Market (Nasdaq: WFM) store and is currently under construction.

In November, residents began moving into luxury condominium tower Waiea, the first of the projects to be completed. Anaha, a 311-unit building designed by Chicago-based Solomon Cordwell Buenz in partnership with Benjamin Woo Architects, will be the second tower to be completed.

Ke Kilohana, which broke ground in October, will be 43 stories with a 23,000-square-foot Longs Drug store on the ground floor. The tower will include 424 units, 375 of which will be reserved housing priced for local, first-time home buyers earning 100 to 140 percent of Honolulu’s area median income.

The master plan is said to eventually include 16 towers with up to 4,300 residences, and 1 million square feet of retail space.