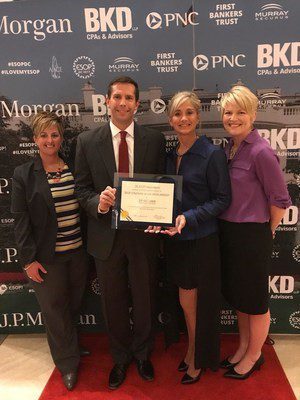 DETROIT LAKES, Minn. – SJE-Rhombus®, a leading manufacturer of pump control solutions for the water and wastewater industry, has been named the 2017 ESOP Company of the Year. The award was presented by the ESOP (Employee Stock Ownership Plan) Association to SJE-Rhombus employee owners at the annual ESOP Association Conference in Washington, D.C. on May 10th.

“Receiving recognition as the national employee-owned company of the year is an honor,” said Dave Thomas, CEO and President of SJE-Rhombus. “This award showcases our workforce’s commitment and dedication to supporting the growth and success of SJE-Rhombus.”

SJE-Rhombus was one of 18 finalists being considered for the prestigious award. To date, there are approximately 2,900 ESOP companies in the United States; only about 1,000 of those are owned entirely (100 percent) by employees.

Founded in 1975, SJE-Rhombus has expanded to $90 million in sales, with a total of nearly 500 employees and eight locations globally, seven U.S. locations participate in the ESOP program. SJE-Rhombus began its journey into an ESOP company on November 1, 1987, becoming 100 percent employee-owned in 1998. Founder Steve Johnston initially established the company as an ESOP to reward the employees who helped spur the company’s growth.

Employee owners are briefed at quarterly shareholder meetings, and every February the company reveals the latest stock price at a special event dubbed “ESOP Week.” During the week, the CEO and CFO visit each location to conduct shareholder meetings, present stock certificates, and conduct interactive meetings in which employees can ask questions and learn about the potential value of their stock five, 10, and 15 years in the future.

The company operates an Employee Ownership Activity Committee that is tasked with sharing the employee-ownership message. Today, employee owners from all seven of the company’s U.S. locations participate in the committee.

Additionally, SJE-Rhombus offers a scholarship program for employees’ children, grandchildren, and spouses. It sponsors a foundation and charitable fund program that donates to non-profits and philanthropic causes, and has won numerous awards for its wellness initiatives.

The company previously was awarded the Silver ESOP Award from The ESOP Association for maintaining its ESOP for at least 25 years.

About The ESOP Association

The ESOP Association, founded in 1978, the largest employer-sponsored advocacy and education association focused on retirement savings in America, is a national nonprofit membership organization, with 18 local chapters, serving approximately 2,900 employee stock ownership plan companies, professionals with a commitment to ESOPs, and companies considering the implementation of an ESOP.

The Association’s focus is on preserving and promoting employee stock ownership through the ESOP structure. Enhancing laws before Congress and regulatory agencies that govern ESOPs and providing its members with expert educational ESOP programming and information are its main concentrations. To learn more about the ESOP Association, visit  https://www.esopassociation.org.

SJE-Rhombus (S.J. Electro Systems, Inc.) was founded in 1975 by Steve Johnston. Today, over 40 years later, SJE-Rhombus has grown into a leading manufacturer of reliable, trouble-free liquid level controls for the water, wastewater and sewage industries throughout the United States and Canada, as well as into global markets. SJE-Rhombus offers a wide variety of control products for residential, commercial, municipal and industrial markets. From control panels utilizing embedded circuit board technology, to complete control and monitoring systems designed and built to individual specifications, SJE-Rhombus represents the most reliable integration of engineering and manufacturing capabilities in the industry.