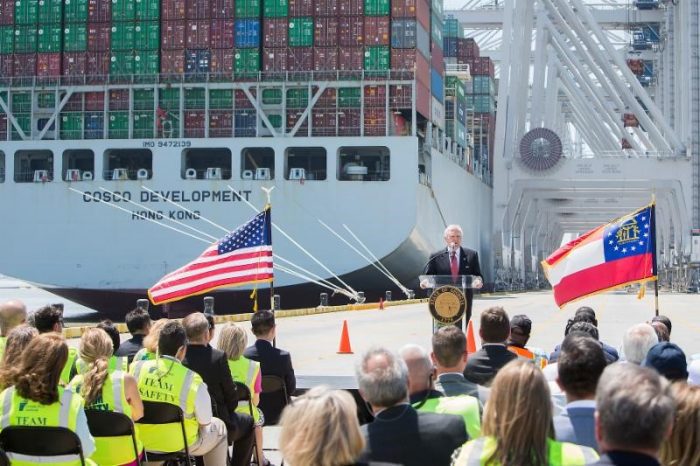 Savannah, Ga. – At an event on the docks of the Port of Savannah today, Governor Nathan Deal, port officials and the maritime community were on hand to welcome the COSCO Development, the largest containership to ever call on the U.S. East Coast as it handled 5,500 containers, a record for Georgia’s ports.

During the ship’s 30 hours at dock, up to six cranes moved 10,000 TEUs (Twenty-foot Equivalent container Units) on and off the vessel, which translated into more than 50 percent of the vessel’s entire volume for its maiden voyage to the U.S. East Coast.

With a capacity of 13,092 twenty-foot equivalent container units, the Development measures 1,201 feet long and 158 feet wide.

“The COSCO Development is the start of a new era in the East Coast container trade,” said GPA Executive Director Griff Lynch. “With their shift to larger, more cost-effective vessels, the shipping lines are gravitating toward gateway ports. The Port of Savannah is perfectly suited to handle the larger exchanges of Neo-Panamax vessels.”

Lynch added: “We would like to thank the men and women of Georgia’s ports, the International Longshoremen’s Association and other vital members of the maritime community for their outstanding work that has made today’s accomplishments possible.”

Crews working the COSCO Development were able to complete more than 220 container moves per hour during a period in which the GPA and International Longshoremen worked a total of nine vessels, moving more than 12,000 total containers, or 21,600 TEUs. The 1,200-acre Garden City Terminal features 26 ship-to-shore cranes and 146 rubber-tired gantry cranes – more than any other U.S. terminal.

“Generation after generation have been committed to building this facility into the world-class port it is today,” GPA Board Chairman Jimmy Allgood said at a news conference to mark the event. “Those decades of dedication have made possible the work you see being achieved with speed and efficiency.”

In the near future, vessels such as the COSCO Development will be able to take advantage of deeper water as the Savannah Harbor Expansion Project (SHEP) makes additional progress. At present, dredging for the outer harbor to 49 feet at mean low water, which constitutes about half of the shipping channel, is 60 percent complete. The inner harbor project will provide 47 feet of deepwater draft when complete. Lynch thanked Governor Deal, the Georgia legislature, the Georgia delegation in Washington, D.C. and the U.S Army Corps of Engineers for their tireless efforts to ensure the completion of the Savannah Harbor Expansion Project.

“Savannah is already the load center for trade in the U.S. Southeast, but deepening our harbor to better accommodate vessels such as the Development will make Savannah even more attractive to cargo owners,” Lynch said.

A study by the U.S. Army Corps of Engineers showed that U.S. companies moving goods through Garden City Terminal will save $282 million per year once the harbor deepening is complete in 2021.

“Deeper water in Savannah will complement the new, expanded Panama Canal by reducing the expense of delivering goods to customers at home and abroad,” said Allgood.