3D Modeling Will Play a Huge Role in Rapid Urbanization 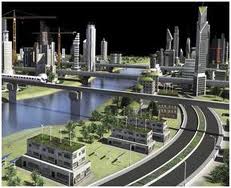 The first generation of 3D models of cities were used as visual tools for illustrating ideas, like how a new building might alter a skyline. “This prompted the idea that OK, we’re using it only for visual impacts, but what if we used it more for design purposes?” says Jay Mezher, who worked on the Seattle model for the engineering and construction firm Parsons Brinckerhoff. 3D simulations of cities have the potential to help engineers and planners anticipate natural disasters and population growth, and to better plan for them in a way that goes far beyond rendering cityscapes as if they were in a video game.

The Seattle model, Mezher says, is really more of an information database than a visualization, and one to which more data can constantly be added. “It’s a living document,” he says, “and it’s still evolving.” Want to layer on real-time traffic data to study road improvements? Or subsurface utility infrastructure to anticipate flooding damage?

Read more via The Atlantic Cities