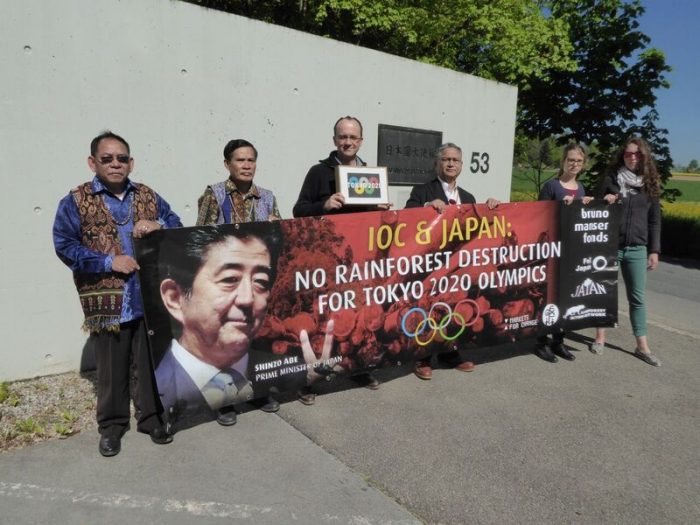 Parul Dubey on May 11, 2017 - in Buildings, Structural components

(TOKYO, BERN, BERLIN & MIRI) This week, activists from around the world are staging protests demanding an immediate halt to the use of tropical wood for construction of the new Olympic facilities in Tokyo. On Wednesday, over 140,000 signatures were delivered to Japanese Embassies in Switzerland and Germany calling for urgent action by the Japanese government. The demonstrations are a response to evidence that the Japanese Government is using tropical wood sourced from Shin Yang, a logging company in the State of Sarawak, Malaysia, with a record of human rights abuses, illegal logging, and rainforest destruction. Civil society groups are urging an overhaul of the Tokyo Olympics procurement policy and a thorough investigation into the legality and sustainability of tropical wood being used for Olympic construction.

On April 3rd 2017, investigators found tropical plywood supplied by Sarawak logging company Shin Yang being used to mold concrete in the construction of the new Olympic Stadium in Tokyo.

[1] On April 27th, Japanese authorities confirmed that the plywood identified on the construction site was in fact supplied by Shin Yang, and disclosed that it came from Shin Yang’s plywood mill in Bintulu, Sarawak.

Bilong Oyoi, a former headman from the Penan village of Long Sait who helped to deliver the petition, is very concerned about tropical plywood from Shin Yang, and likely from other Sarawak sources, being used at construction sites for Olympic venues: “I would like to forward a message from the Penan to the respective Japanese authorities: In Sarawak, our forests have been logged, and there are very few trees left. Please help us to protect what is left of the rainforest.”

Mathias Rittgerott of Rainforest Rescue, who delivered the petition in Germany stated, “The Olympics is supposed to be all about ‘fair play’ and ‘the youth of the world coming together’. In reality the human rights of Sarawak’s indigenous people and the environment are being threatened by the Olympics. The use of tropical timber from Sarawak on Olympic construction sites is nothing to celebrate.”

Petition signatories demanded that no tropical timber be used for the construction of Olympic venues in Tokyo and that Japan must introduce strict and binding standards for timber on legality, sustainability and human rights. Annina Aeberli of the Bruno Manser Fund, who delivered the petition to the Japanese Embassy in Switzerland said “The Japanese authorities and the International Olympic Committee have to take immediate measures to assure that no timber from contexts of human rights abuses, environmental destruction and violations of laws are allowed at the construction sites.”

On Wednesday, a group of activists protested in front of the Shin Yang office in Miri, Sarawak, Malaysia. On May 8th, a protest was held by Japanese NGOs at the Olympic stadium construction site in Tokyo. Akira Harada of the Japan Tropical Forest Action Network said, “We relayed increasing concerns within Japan about the role of our country in undermining human rights and the vanishing tropical forests of Sarawak while authorities greenwash this unacceptable situation”.

To date, the Japanese Government has failed to address the risks of association with rainforest destruction, illegal logging, and human rights abuses. Nearly all concrete formwork plywood used in Japanese construction is made from tropical wood, with the overwhelming majority sourced from the Malaysian state of Sarawak and Indonesia. Sarawak has one of the highest rates of deforestation in the world and various investigations have revealed the corrupt practices of the timber business in Sarawak and high risks of illegal logging. Shin Yang is a major supplier of concrete formwork plywood to Japan and particularly known for their unsustainable logging practices in the transboundary conservation area known as the Heart of Borneo, for neglecting the rights of local communities, and for illegal logging.[2]

Olympic authorities defended their use of Shin Yang plywood by stating the panel found on the construction site was PEFC certified, but environmental organizations point to the fact that timber from problematic origins could have been mixed in. Shin Yang’s plywood mill in Bintulu also sources from an area where Shin Yang is committing ongoing human rights abuses against several Penan indigenous communities.[3]

Activists further argue that the Tokyo Olympic Organising Committee’s timber sourcing code is not adequate to mitigate the risk of using timber linked to rainforest destruction, illegal logging, and violations of indigenous rights.[4] In particular, they note that when formwork panels used at a different construction site are brought to the Stadium, these are exempted from the Code’s environmental sustainability and human rights requirements.[5] “The Code is effectively allowing unsustainable tropical wood to be laundered. We should instead be using low risk domestic wood for the construction of the Olympics,” said Toyo Kawakami from Rainforest Action Network.

In December 2016, over 40 civil society organizations warned the International Olympic Committee (IOC) and the Japanese authorities about the risks associated with using wood products from Sarawak and Indonesia.[6]