/ Corporate / Data from the Bureau of Labor Statistics: The Architecture and Engineering Sector Gained 2,100 jobs

Data from the Bureau of Labor Statistics: The Architecture and Engineering Sector Gained 2,100 jobs 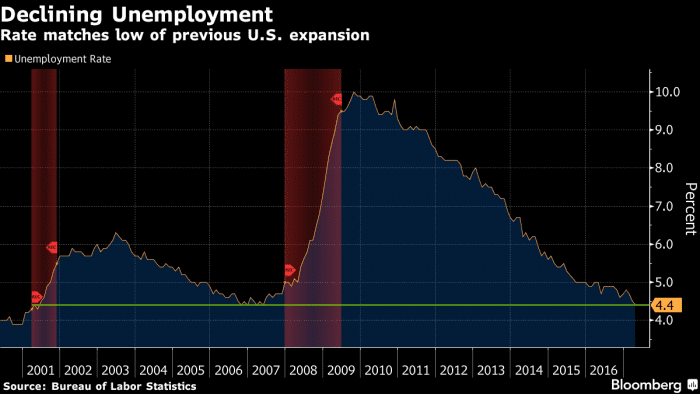 U.S. payroll gains rebounded in April by more than forecast and the jobless rate unexpectedly fell to 4.4 percent, signaling that the labor market remains healthy and should support continued increases in consumer spending.

The 211,000 increase followed a 79,000 advance in March that was lower than previously estimated, a Labor Department report showed Friday. The median forecast in a Bloomberg survey of economists called for a 190,000 gain. While the unemployment rate is now the lowest since May 2007, wages were a soft spot in the report, climbing 2.5 percent from a year earlier.

The brighter figures follow a weaker-than-expected reading in March, when payrolls were partly depressed by a snowstorm that slammed the Northeast during the survey week. Strengthening business sentiment might be translating into hiring, and the data should keep Federal Reserve policy makers on track to raise interest rates in the coming months after officials declared the first-quarter slowdown to be temporary.

“Labor market conditions remain robust and continue to tighten,” said Ward McCarthy, chief financial economist at Jefferies LLC in New York, who had forecast a payrolls gain of 220,000. “This data will keep the Fed on track for a preferred 2017 normalization timeline of rate hikes in June and September and the first step toward balance-sheet normalization in December.”

The report showed revisions to the previous two months subtracted 6,000 jobs from payrolls. The first quarter saw a 176,000 average monthly increase after a 187,000 average pace in 2016.

The unemployment rate compares with economists’ projection for 4.6 percent. It’s now below the 4.5 percent level where Fed policy makers in March had forecast it would reach in the fourth quarter, based on their median estimate.

Employment gains were broad-based though concentrated in services in April. Leisure and hospitality registered a 55,000 increase, education and health services was up 41,000 and financial activities rose by 19,000. Retail rebounded with a 6,300 increase following a revised loss of 27,400.

Total private employment, which excludes government agencies, climbed by 194,000 in April, following a 77,000 advance the prior month. Government payrolls rose by 17,000 in April, including a 6,000 decline at federal agencies and 23,000 increase at state and local governments.

Wage growth accelerated on a monthly basis to 0.3 percent from a revised 0.1 percent gain in March. At the same time, the 2.5 percent year-over-year gain in average hourly earnings was the weakest since August, following a 2.6 percent rise in March.

The employment cost index increased 0.8 percent in the first quarter for the best performance since the end of 2007, a separate Labor Department report showed last week.

Absent faster wage growth, consumers have retained a healthy outlook as they’ve largely socked away savings from income gains including stronger stock and housing prices. Weaker household purchases in the first quarter reflected a slowdown in automobile sales, which are easing to a more sustainable rate, and smaller home-heating bills owing to unusually warm weather.

The underemployment rate, a measure that includes those working part-time who would take a full-time job if it were available, dropped to 8.6 percent, the lowest since November 2007, just before the last recession began. It was from 8.9 percent in March.

The number of discouraged workers fell by 5,000 in April to 455,000, and was 363,000 the month the last recession started. The participation rate, which indicates the share of working-age people who are employed or looking for work, decreased to 62.9 percent from 63 percent the prior month.

The seasonally adjusted number of people working part-time who would prefer a full-time job fell to 5.27 million, the lowest since April 2008, moving closer to the 4.62 million reading from December 2007.

“The overall picture is that no matter how you dissect it, the labor market looks to be getting very tight,” Michael Feroli, JPMorgan Chase & Co.’s chief U.S. economist, said in a note.

Comments are disabled
NEXT ARTICLE
Architectural Awards Program Highlights Top Copper Projects From This Year and the Past Decade
May 5, 2017
PREVIOUS ARTICLE
Fluor Joint Venture Selected for Texas Southern Gateway Project
May 4, 2017