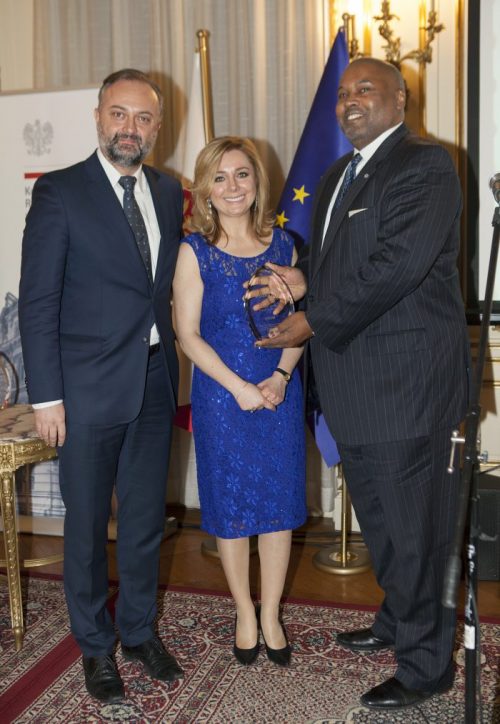 New York, NY–The Consulate General of the Republic of Poland in New York recognized leaders of the multibillion dollar U.S. –Poland economic exchange during the 3rd Annual Polish-American Business Gala. More than 300 representatives of leading U.S., European, and Polish business organizations attended the event organized by the Trade and Investment Section of the Consulate. The U.S.-based engineering and project management firm CH2M and an online education platform Brainly.com received the 2017 Friend of the Polish Economy awards.

“The continuously increasing trade and economic exchange between Poland and the United States totals more than $9.6 billion annually and includes import and export of construction, industrial, and chemical materials and machinery; construction services; software, IT, and online media services; aircraft and military equipment; and food products and consumer goods. In addition, the investments by Polish companies in the U.S. – ranging from copper mines to building automation and software development firms – exceed $2 billion and have created in excess of 3,000 jobs,” said Maciej Gołubiewski, Consul General of the Republic of Poland in New York.

The global engineering and project management firm CH2M is based in the U.S., while the online education platform Brainly.com, the world’s largest social learning community of 80 million students in 35 nations, is based in Krakow and New York City. “We are delighted to recognize CH2M and Brainly.com with the 2017 Friend of the Polish Economy awards for their contributions to the trade between our countries,” added Sabina Klimek, Consul and Counselor at the Trade & Investment Section of the Consulate of the Republic of Poland in New York.

CH2M Polska, established more than 20 years ago, employs approximately 1,000 engineering, project management, architecture, construction, and support personnel in Poland, making it one of the largest engineering companies in the country. The firm’s Polish operations are headquartered in Krakow, with regional offices in Warsaw, Gdansk, and Katowice.

In addition to providing project management and engineering services to the Polish market, CH2M’s Krakow office serves as the company’s shared service center for the entire European market as well as for the Middle East and North Africa (MENA) markets. CH2M’s current projects in Poland include the $97 million Gdansk Deepwater Container Terminal 2 expansion, the S8 Expressway design/build development, and the E65 Railway Line modernization.

Brainly CEO Michał Borkowski said, “I am honored by the recognition of our contributions to the international trade, education, knowledge sharing, and cultural exchange. Brainly is the world’s largest student-powered social learning community. Our mission is to inspire students to collaboratively share and explore knowledge.”

“We give every student access to peer-to-peer, personalized learning outside of the classroom, thus providing them a simple and accessible way to work through questions on their coursework and empower them to learn to solve problems across all common subjects. Brainly offers a supportive community of like-minded peers that fills the gaps that students face in their own schools—whether those gaps are social, behavioral, or academic,” added Katie Sagan, Brainly Head of Strategy and Operations.

During the event, Consul Klimek outlined several other success stories of the American-Polish economic exchange. These include the largest Polish investor in the U.S.—KGHM Polska Miedz—which owns and operates the Carlota copper mine in Nevada and the Robinson copper, gold, and molybdenum mine in Arizona, which employ approximately 3,000 workers and engineers. Other examples of Polish businesses operating in the U.S. include furniture manufacturer and IKEA supplier Com.40, which established a manufacturing plant in Danville, VA, which employs more than 800; cosmetics store chain Inglot operating 47 retail stores in the U.S., including one in Manhattan’s Times Square; Korona S.A., one of the largest producers of candles in the world and Walmart supplier, which invested $18.3 million into a production facility in Dublin, VA, creating 170 American jobs; and building automation system provider and enterprise software developer Source Intl., based in Warsaw, Miami, and San Francisco.

Brainly is the world’s largest student-powered social learning community. More than 80 million people globally come to Brainly each month for help with schoolwork. Today, there are more than 100,000 questions answered per day across Brainly’s global sites. Brainly has users from over 35 countries.

Brainly raised a $9 million Series A round of funding in October 2014, led by General Catalyst, and expanded operations into the U.S. In May 2016, Naspers led a $15 million Series B funding, allowing Brainly to accelerate the U.S. growth and establish an office New York City.