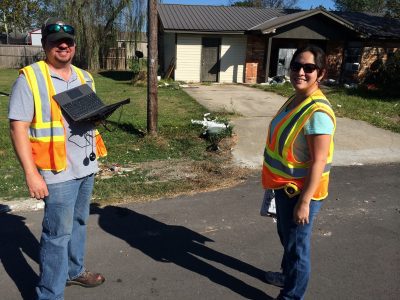 Dozens of Dewberry employees have supported the Federal Emergency Management Agency (FEMA) with technical analyses of flood impacts and on-site damage assessments over the past several months, under the firm’s Department of Homeland Security (DHS) Remote Sensing for Incidents contract and as part of the Strategic Alliance for Risk Reduction (STARR II) Joint Venture. Work was performed in southern Louisiana following the August flooding and along the East Coast following Hurricanes Hermine and Matthew. 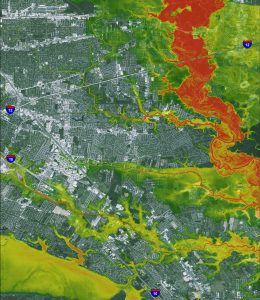 The Louisiana flooding produced a record rainfall that overwhelmed rivers and waterways over the course of four days. Twenty-two parishes were designated federal disaster areas. During the earliest stages of the storm, Dewberry geospatial specialists were tasked by FEMA with creating a flood depth grid depicting the extent of the storm’s impact from the heavy rains, flash flooding, and inland riverine flooding. The geospatial teams worked around the clock over the next several days to update the flood depth grid and assist FEMA in identifying potential building and infrastructure damage, isolated communities, and debris accumulation. Staff from Dewberry’s New Orleans office were among those contributing to the work, including employees who were faced with flooding and clean-up in their own communities. (See Jerri Daniels’ story.) 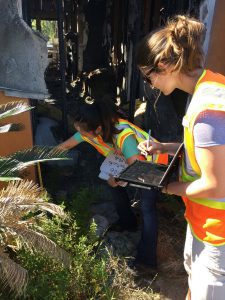 Laura Szczyrba of Dewberry’s Fairfax, Va., office enters damage assessment information on a tablet while Anne Lee, based in Gainesville, Va., searches for a water line to indicate the height of the flooding along a severely damaged home’s exterior. The home is located in Louisiana’s Ascension Parish. – Photo courtesy of Dewberry

While Dewberry teams were still at work in response to the Louisiana flooding, Hurricane Hermine, a Category 1 storm, reached Florida over Labor Day weekend. Hurricane Matthew made landfall in the U.S. on October 8, causing extensive flooding from Florida to Virginia. Dewberry prepared flood depth grids for FEMA’s storm impact analysis, beginning with topographical data gathered in advance of both storms in order to expedite delivery. The information is used by FEMA and state and local agencies to support damage assessments and provide relief to those impacted by the storms. 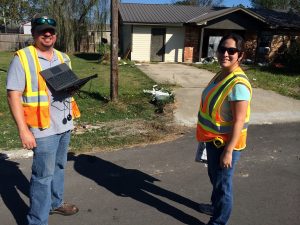 Max Vickers of Dewberry’s Atlanta office and Rebecca Hernandez of the New Orleans office team up for an on-site damage assessment in southern Louisiana. – Photo courtesy of Dewberry

Dewberry is a leading, market-facing firm with a proven history of providing professional services to a wide variety of public- and private-sector clients. Recognized for combining unsurpassed commitment to client service with deep subject matter expertise, Dewberry is dedicated to solving clients’ most complex challenges and transforming their communities. Established in 1956, Dewberry is headquartered in Fairfax, Virginia, with more than 50 locations and 2,000+ professionals nationwide. To learn more, visit www.dewberry.com.