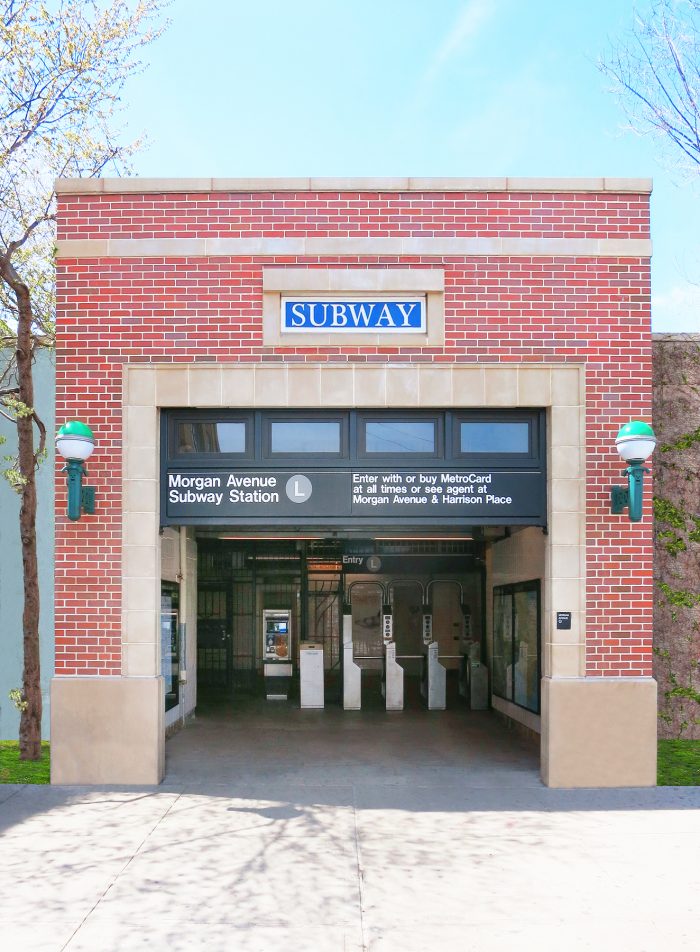 Brooklyn, NY – The Metropolitan Transportation Authority (MTA) and the New York City architectural and planning firm of Urbahn Architects have completed the renovation of the historic Morgan Avenue subway station house. Serving the L train line, Morgan Avenue station house is located on the west side of Bogart Street, at the intersection of Harrison Place, in the East Williamsburg section of Brooklyn. MTA served as project manager as well as structural; civil; and mechanical, electrical, and plumbing (MEP) engineer for the upgrades. General contractor was Double M Construction.

Opened on July 14, 1928, as part of an extension of the BMT Canarsie line, the Morgan Avenue station serves the eastern section of the trendy Williamsburg neighborhood, an area that is increasingly popular with young professionals due it its diverse ethnic population, numerous restaurants and bars, availability of rental apartments, and very easy commute to Manhattan via the L train.

According to Urbahn Associate Nandini Sengupta, LEED AP, “The renovation included replacement of the entire 400-square foot brick and limestone façade, repairs to the roof, and installation of a new framed entrance with transom windows, exterior LED lighting, and exterior signage.”

The project team installed a new façade that features brick set in a geometrical pattern and a limestone base and apron. The 2,145-square foot flat concrete slab roof behind a decorative brick coping received a new asphalt membrane waterproofing system. Urbahn also designed renovations to the selected sections of the interiors on the mezzanine level, including repairs to wall tiles and waterproofing. In addition, MTA replaced several structural steel members within the station house.

Urbahn Architects is a full-service planning and design firm based in New York City.  Since its founding in 1945, the firm has designed projects for organizations and institutions that operate in the residential, healthcare, education, justice, science, transportation, and infrastructure sectors. Urbahn served as the architect for some of the nation’s most iconic structures, including the Vehicle Assembly Building and Launch Control at Kennedy Space Center in Cape Canaveral, FL, and the Fermi National Accelerator Lab in Batavia, IL. Urbahn’s annual domestic and international project workload exceeds $500 million in construction value.

MTA subways, buses, and railroads provide 2.73 billion trips each year to New Yorkers—the equivalent of about one in every three users of mass transit in the United States and two-thirds of the nation’s rail riders. MTA bridges and tunnels carry more than 297 million vehicles a year—more than any bridge and tunnel authority in the nation.

Over the past three decades, the MTA has committed approximately $102.4 billion to restore and improve the network so that today it runs at unprecedented levels of efficiency. The MTA is continuing its rebuilding and improvement efforts through the 2015–2019 Capital Program and has committed significant resources to the first substantial expansion of the network in 60 years, including Long Island Rail Road access to Grand Central, the uptown segment of a full-length Second Avenue subway, and the extension of the number 7 line west from Times Square to the Javits Center.

A public-benefit corporation chartered by the New York State Legislature in 1968, the MTA is governed by a 17-member board. Members are nominated by the Governor, with four recommended by New York City’s mayor and one each by the county executives of Nassau, Suffolk, Westchester, Dutchess, Orange, Rockland, and Putnam counties. Members representing the latter four cast one collective vote. The New York State Senate confirms all Board members.