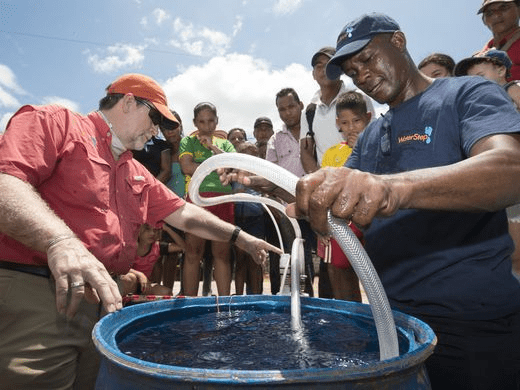 Louisville, KY – On Saturday, April 1, a deadly landslide devastated Mocoa, Colombia, a town of 60,000 near the Ecuadorian border. More than 300 people are known to have died in the disaster, more than 100 are still missing and approximately 2,700 residents are living in shelters after heavy rains caused mud, rocks and water to engulf the town, sweeping away entire neighborhoods. Some areas remain without safe water and electricity, and police officers have been sent in to deter looters.

Louisville, Kentucky-based non-profit WaterStep has been requested to help provide safe water to the landslide victims. WaterStep officials are currently in route from Ecuador (where they were meeting with partners and community leaders, as well as following up on their relief efforts for those hit by the 7.8 magnitude earthquake that destroyed several cities last April) and will arrive in Mocoa on Sunday, April 9. The WaterStep team will deliver M-100 Chlorinators and Bleach Makers to Colombian residents in order to provide safe water in landslide-stricken regions, especially to patients receiving care in hospitals.

“Being in Ecuador with a water team this week, and being so near to Mocoa, we must try to respond to the flooding and help the Columbians,” says Mark Hogg, WaterStep Founder and CEO. “We’re just too close. When a disastrous flood hits a community, contaminated water invades every facet of the culture. There’s nothing safe to drink and no disinfectant to clean anything. WaterStep’s tools and training not only fill gaps in the initial days of chaos, but, have also been proven as long-term solutions for safe water and health long after the tragedy has passed. As a result, it’s critical that we continue ongoing funding for water relief and water development.”

For more information about this, and other safe water and health education projects in disaster situations like Ecuador and Colombia, visit www.waterstep.org or call (502) 568-6342.

WaterStep, headquartered in Louisville, KY, is a 501(c)(3)nonprofit organization that believes everyone should have access to safe water and that no one should suffer from waterborne illnesses. WaterStep implements water projects and equips people with tools and training in water purification, disaster relief, health education, and well repair. Since its founding in 1995, WaterStep has brought safe water to people in over 30 countries. To learn more, call (502) 568-6342 or visit waterstep.org.