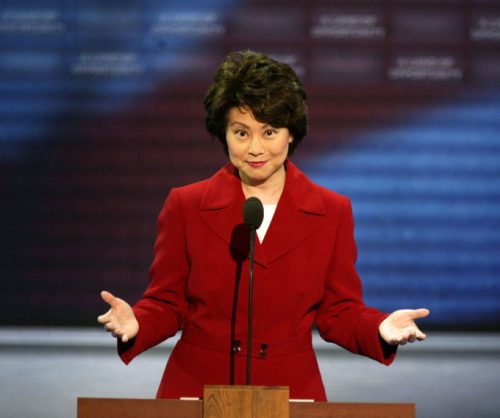 DALLAS – Transportation Secretary Elaine Chao said Tuesday that the administration may release infrastructure legislation as soon as May, causing most advocates to applaud the momentum but wonder whether it will move forward quickly.

Speaking at a White House town hall with business leaders, Chao said, “We’re working on a legislative package that will probably be [announced] in May or late May, or something like that.”

“We’re very much aware of the need for legislation, she added.”

The infrastructure plan will be large and it will focus on funding for projects that can get underway soon, President Trump also told the executives.

“So we have to build roads. We have to build highways. We’re talking about a very major infrastructure bill of a trillion dollars, perhaps even more,” Trump said.

“We’re going to be very strong that it has to be spent on shovels and not on other programs,” he said. “If you have a job that you can’t start within 90 days, we’re not going to give you the money for it. I don’t want to send $1 billion to New York and five years later find out it was never spent.”

Reform of regulations that slow down construction projects will be a big part of the infrastructure proposal, Trump said.

“We are absolutely destroying these horrible regulations that have been placed on your heads,” Trump said. “Getting a building approved in New York is a horrible, horrible thing. And that’s nothing compared to when you get into the highways and the dams.”

Details on the $1 trillion, 10-year infrastructure plan have been sketchy since the proposal was unveiled by the Trump campaign in late October. That proposal included $137 billion of federal tax credits that proponents said could leverage billions of dollars in private investments in revenue-producing infrastructure such as toll roads.

But Chao said in January that some direct federal funding would be included in the administration’s infrastructure plan during her testimony at her confirmation hearing before a Senate committee. She and Trump would support more direct federal funding for infrastructure beyond what is in the five-year Fixing America’s Surface Transportation Act adopted in late 2015, Chao told lawmakers on the Senate Commerce, Science and Transportation Committee.

Gary Cohn, director of the White House National Economic Council, told the business executives that the administration’s infrastructure policy would cover a wide variety of projects, including an upgraded air traffic control system and a modernized electric power grid.

“We have taken the broadest interpretation of infrastructure,” he said.

Private investors will be sought to help rebuild rail systems to accommodate faster trains, he said.

“I think it (healthcare reform) makes the need for more urgent … to move up an infrastructure measure,” said Basso, a former chief operating officer of the American Association of State Highway and Transportation Officials. “However, the congressional leadership still seems lukewarm to moving this year. I believe the tax reform bill is the best shot.”

Moving the infrastructure package up to May looks like an effort by the Trump administration to get some positive momentum, said Jack Schenendorf, of counsel with the Covington & Burling law firm.

“They ran into problems with healthcare reform and tax reform is going slowly,” he said. “Infrastructure might be what moves the story forward.”

Moving infrastructure ahead of tax reform “doesn’t make a lot of sense,” said Schenendorf, who spent almost 25 years on the staff of the House Committee on Transportation and Infrastructure.

“If the plan is close to the order of magnitude discussed during the campaign of $1 trillion over 10 years, it be very unusual for Congress to move an infrastructure bill forward without the revenue,” he said.

“A tax reform bill would be needed to carry the financial provisions of the infrastructure plan, whether those are tax credits, fees, an increase in the gasoline tax, or repatriated overseas profits,” he said.

“Whatever is going to make that happen is almost certainly going to come from tax reform.”

“Clearly we are not talking about asking Congress for $1 trillion, of course. This Congress is not going to write a $1 trillion check for anything,” he said.

“What is likely to happen is a real focus on private projects, and on clearing out the regulatory underbrush that is holding those projects back. By our calculations that could address as much as 50% of the projected investment,” Anderson said. “What does it matter whether the Congress writes a check, or if, by the administration’s actions, the private sector is enabled to make massive investments?”

“This is the first time that anyone’s heard of it being that soon,” said Jeff Davis, a senior fellow at the Eno Center for Transportation. “Just last week the director of OMB said it wouldn’t move until the fall.”