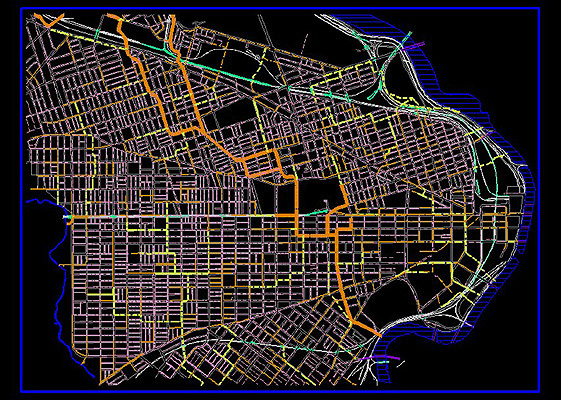 The ‘License to Inspect’ application is a project of PlanPhilly, funded by the William Penn Foundation.  Journalists, planners, city officials and regular citizens are invited to use it.  The application offers intuitive data search, sort, and download functionality that enables users to search building permits; zoning variances; code violations including inspection violations, dangerous conditions and demolitions; fire code violations; cease occupancy orders; stop work orders; and housing inspection licenses among other data provided by an API built by Philadelphia’s Office of Innovation and Technology.  After signing up for a free account, users are able to subscribe to email alerts for notifications of changes in their neighborhoods, including zoning, permitting and licensing activities.  In other words, if a user is interested in knowing when new permits are generated in the 4-5 blocks around his or her house, they would do a search, save their search parameters, and then ask to be notified (daily, weekly or monthly) when new records appear.

“Through OpenDataPhilly and other efforts, Azavea has supported and promoted Open Data in Philadelphia for several years.  PlanPhilly could not have provided this online tool to the public without the City’s willingness to share the data related to licenses and permits,” said Robert Cheetham, CEO and President of Azavea.  “This project is a real demonstration of how open data can enable new types of applications and services that benefit the public.”

As more and more municipalities nationwide release their data, applications like ‘License to Inspect’ are made possible, which in turn fosters a dynamic dialogue between data consumers, software engineering companies, the public, and the municipal government that holds the data.  This is not the first time that the City of Philadelphia has collaborated with Azavea and organizations like PlanPhilly to demonstrate its commitment to open data and open data initiatives.  In April 2011, in partnership with WHYY Radio, and Technically Philly, the City’s Open Access Philly task force contributed dozens of data sets from multiple city departments to OpenDataPhilly.org, a first-of-a-kind Philadelphia-centric catalog of over 175 online data, applications and APIs.  Later that summer, the OpenDataPhilly partners organized OpenDataRace whereby non-profit organizations voted for the data sets they wished the City to release.  Permits and citations were among the most requested data sets.  Now, with ‘License to Inspect’, this data set and many more are available for anyone to freely consume.

“PlanPhilly, Azavea and the William Penn Foundation have been working with L&I on the release of this data for three years, and we are thrilled to be able to see this application realized.  Many parties have been involved in the effort, and we are excited that the resulting tool will benefit a large range of users,” said Matt Golas, Managing Editor, PlanPhilly.

About Azavea – Azavea is an award-winning geospatial analysis (GIS) software development firm specializing in the creation of location-based web and mobile software as well as geospatial analysis services.  Azavea is a certified B Corporation that applies geographic data and technology to promote the emergence of more dynamic, vibrant, and sustainable communities while advancing the state-of-the-art through research.  Each of Azavea’s projects, products and pro bono engagements showcases this commitment.  Find out more at http://www.azavea.com.

About PlanPhilly – PlanPhilly is an independent news gathering entity affiliated with PennPraxis, the clinical arm of the School of Design of the University of Pennsylvania. Former reporters and editors from The Philadelphia Inquirer, as well as citizen journalists, provide daily news coverage of the built and planned environment.  Find out more at http://planphilly.com/.