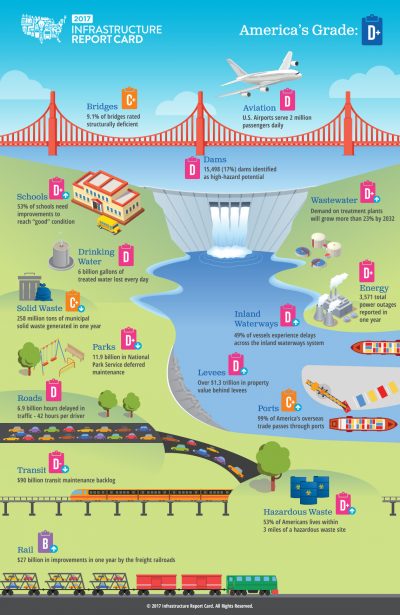 Every four years, ASCE’s Report Card for America’s Infrastructure depicts the condition and performance of U.S. infrastructure in the familiar form of a school report card, assigning letter grades based on the physical condition and needed investments for improvement.

Every four years, the American Society of Civil Engineers (ASCE) produces a report card as a way to determine the quality of U.S. infrastructure. The 2017 ASCE Infrastructure Report Card was released March 9, 2017, and the news isn’t good. As in 2013, the nation’s average grade remains a D+.

Members of the ASCE Committee on America’s Infrastructure, made up of 28 civil engineers from across the country with decades of expertise in all categories, volunteer their time to work with ASCE Infrastructure Initiatives staff to prepare the report card. The committee assesses relevant data and reports, consults with technical and industry experts, and assigns grades.

According to ASCE, raising the infrastructure grades will require a wide range of solutions, beginning with investment. ASCE estimates the nation’s infrastructure needs a total of $2 trillion across the 16 categories through 2025. The report card estimates that a failure to do so by 2025 would cause a $3.9 trillion hit to the gross domestic product (GDP), $7 trillion in lost business sales and 2.5 million lost jobs.

Additional information regarding the report card, category grades and state report cards and information, as well as infographics, videos and other resources, can be found at www.infrastructurereportcard.org or via the Save America’s Infrastructure app in the Google Play and App Stores.