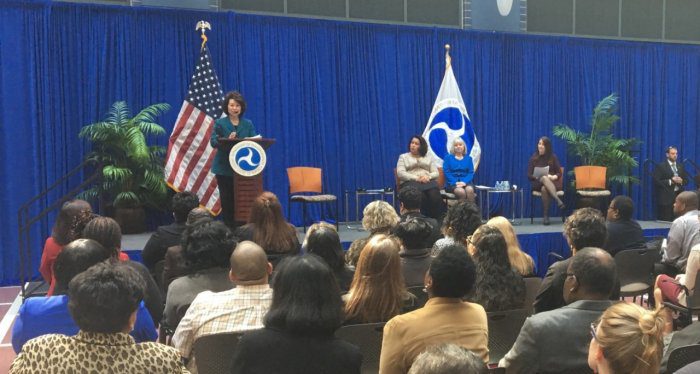 Transportation Secretary Elaine L. Chao has five sisters. Her parents taught all of their daughters to set goals and to proceed step-by-step to advance their situations in life.

“My parents were incredible people who believed that their daughters could do anything they wanted in this wonderful country which offered so much opportunity,” she told hundreds of U.S. Department of Transportation employees listening both remotely and in person today at the 2017 US DOT Women’s History Month celebration.

In addition to Secretary Chao’s opening remarks, the event featured a panel of Women Trailblazers from the Department who shared how their career journey and lessons learned along the way, how US DOT evolved over the years and what the next generation can do to advance at US DOT and in the world.

Moderated by Leslie Proll with the Departmental Office of Civil Rights, the Trailblazers Panel included Judy Kaleta, deputy general counsel in the Office of General Counsel; Irene Rico, associate administrator for civil rights at the Federal Highway Administration; Daphne Jefferson, deputy administrator at the Federal Motor Carriers Safety Administration; and Patricia Hu, director of the Bureau of Transportation Statistics in the Office of the Secretary.

All of these women stand on the shoulders of those who came before them, both in the wider transportation industry and specifically at US DOT.   As Secretary Chao noted in her remarks, “By 1923, more than 175 patents were granted to women for inventions related to vehicles, traffic signals and turn indicators.” Some of those who broke ground in transportation, including Mary Converse, the first woman commissioned to the U.S. Merchant Marine, and Mary Anderson, the inventor of the windshield wiper.

The contributions made by the incredible women who came before us have paved the way for today’s women to enjoy an exciting future in transportation that Secretary Chao says will see new technology revolutionize the way the world moves.

“There is a place for you in this exciting new world,” she told the audience. “And I hope this celebration of Women’s History Month will encourage you to take the next step – no matter how small – to fulfilling your dreams.”