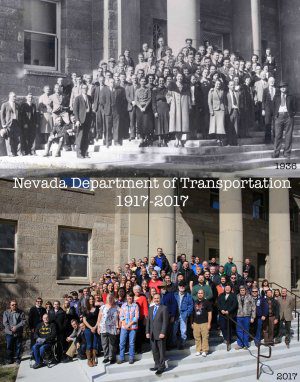 CARSON CITY, Nev. – The Nevada Department of Transportation is celebrating 100 years with historical photos and timeline posted on the Department’s website, as well as an invitation for Nevadans to share their state transportation memories.

The Nevada Department of Highways was formed on March 23, 1917 with a mission to surface the rutted dirt paths that served as the road network of the time. Historical Nevada transportation photos, videos and decade-by-decade history of the progression of state highways are now available at nevadadot.com/100 and by following the department on Facebook and Twitter. An historical e-book will also be published on-line this week.

Nevada residents are also invited to provide memories or reflections of early Nevada transportation to potentially be included on the NDOT website and social media posts by visiting nevadadot.com/100 or contacting NDOT at (775) 888-7000.

“We’ve been helping keep Nevada safe and connected for 100 years,” NDOT Communications Director Sean Sever explained. “Nevada has a rich transportation history, from the dirt paths of a century ago to today’s interstates carrying as many as 300,000 vehicles every day. What we do is about connecting Nevadans, and we want to hear from fellow residents their memories of Nevada’s transportation history, particularly from the first half of the twentieth century.”