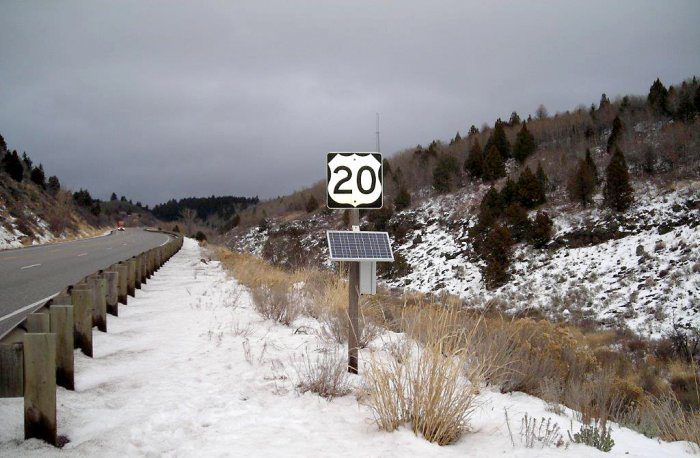 POCATELLO – To aid traffic flow for tens of thousands of drivers during upcoming construction on Interstate 15 in eastern Idaho, the Idaho Transportation Department (ITD) is turning to new technology. Bluetooth-based roadway sensors in the Interstate 15 median will provide real-time travel information during construction starting later this spring.

Between this spring and next year, ITD will resurface deteriorated pavement on I-15 and make numerous bridge repairs. Construction will include multiple work zones along a 140-mile stretch of I-15 between Utah and Montana.

More than 50 sensors will be connected to portable message signs (similar to those seen in this picture, but attached to poles rather than sign posts) located at the beginning of construction zones to communicate traffic impacts ahead. Sensors pick up the Bluetooth signal on phones or in vehicles as they pass any two points in the work zone, and the times between them are calculated in order to find average travel speeds.

ITD will also make the real-time travel data available to the public through a mobile app being developed, and is working to place the information on the project website.

The sensors will help ITD monitor traffic conditions during summer/fall construction, and during the winter months.

“This technology will give us reliable traffic data we can use to maximize traffic flow and make our work zones safer,” said Dan Harelson, ITD District 5 Engineering Manager. “ITD is asking motorists to plan extra time to travel through construction. Pay attention to signage and changing traffic patterns this summer.”

Similar Bluetooth sensors have been used successfully at various places in Idaho and Utah. The sensors will be removed once construction is complete on I-15. Additional sensors will be installed on U.S. 20 and U.S. 91 during the same timeframe.

To request email updates during I-15 construction, email [email protected] or text INTERSTATE15 to 22828. The I-15 App will be available later this year on Google Play and the App Store.

Highway construction is one of the key forces pushing Idaho toward continued economic vitality by creating jobs, improving safety and reducing traffic congestion.