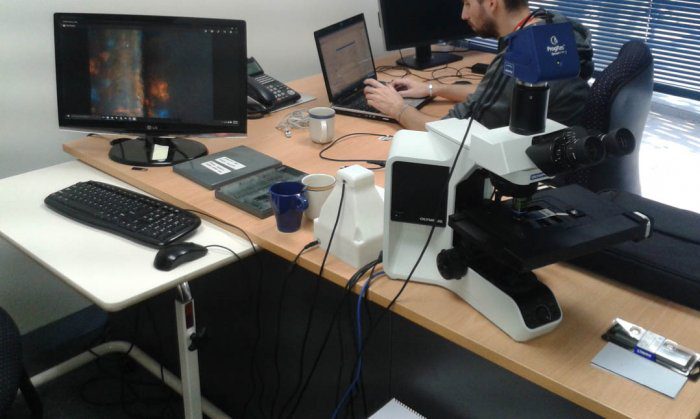 A ROBOTIC microscope has been developed to test air quality at demolition sites to protect workers from deadly asbestos fibres.

Marvin is an analysis program developed by Frontier Microscopy in South Australia that eliminates manual processing of dangerous minerals.

It uses artificial intelligence and a robotic microscope to screen air samples for asbestos fibres in a fraction of the time it takes humans.

Frontier Microscopy will make Marvin commercially available within the next two months and is targeting the global air monitoring services industry.

The use of asbestos has been banned in many countries including the United States, Australia and the United Kingdom however exposure remains an ongoing risk, particularly when working on or demolishing old buildings.

Asbestos is still used in a number of countries including India, China and Russia.

“Asbestos fibres are like tiny cancerous daggers that you inhale and can destroy the lungs,” he said.

“It has been phased out in Australia, the US, and the United Kingdom but much of the third world is still using asbestos products because of its durability.”

Gruber said current asbestos screening processes required people to analyse samples, record the data on paper and then manually enter the information into a computer.

He said this process was too slow and could lead to potentially avoidable exposure.

Marvin’s microscope is a custom built robotic device, which does not include an eyepiece but instead takes up to 100 images across an entire sample in less than a minute.

These images are automatically uploaded to the software where they are analysed for traces of asbestos.

Marvin reduces total analysis time from about 15 minutes to less than two minutes.

It then stores the information on the cloud and formats it into a suitable document for relevant government bodies or companies.

Asbestos was considered one of the most versatile minerals in the 19th and 20th centuries because of its durability, strength and flexibility. It is fire-retardant and has excellent insulation properties.

It has more than 3000 applications including textiles, piping and building materials.

All forms of asbestos are now known to be cancerous and more than 125 million people are exposed to asbestos in the workplace according to the World Health Organisation. Exposure can result in lung cancer, mesothelioma and asbestosis.

“It is deadly but it might not kill you until about 20 years after the fact so there are diseases like mesothelioma that people contract and aren’t aware of … until it’s too late,” Gruber said.

“The scary thing is because there are so many asbestos materials in old buildings that are being torn down, more and more asbestos fibres are being released and the effects won’t peak until about 2020.”

The global air monitoring market is expected to be worth US$5.64 billion by 2021.

Frontier Microscopy was founded by Jordan Gruber and RC Gayathri GT Rajendra and is a recent graduate of the Southstart accelerator program.

It has received AU$50,000 in funding from the South Australian Government’s Early Commercialisation Fund and is still continuing to look for more opportunities.

Marvin will be made available worldwide in the middle of the year.