/ Buildings / A New Office Tower in Manila Tops Out

A New Office Tower in Manila Tops Out 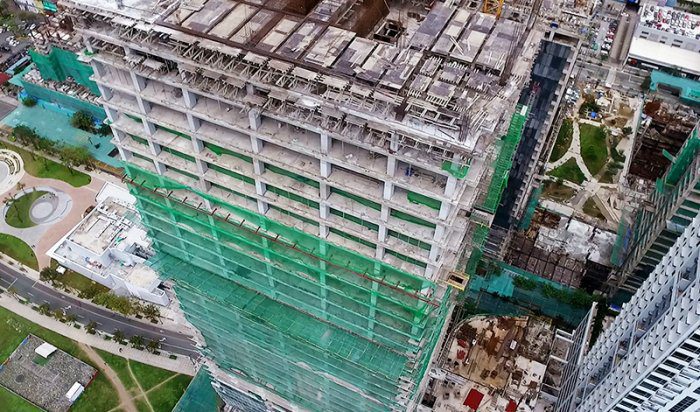 A topping out ceremony was held late last month for The Finance Centre, a 42-story, class A office tower in Manila, Philippines. Thornton Tomasetti, along with local engineering firm SY^2, is providing structural engineering services to Daiichi Properties, the building’s developer. Located within the city’s Bonifacio Global City financial district, the all-concrete tower designed by Gensler consists of an eight-story podium with retail and commercial space on the first two floors, five levels of below-grade parking and 31 floors of column-free office space with an 11.5-meter clear span between the building’s core and perimeter. It also incorporates a number of green spaces, such as a 1,700-square-meter plaza and a sky garden above the retail podium. Local firm AIDEA is the architect of record.

The all-concrete structure offers 11.5-meter clear spans between the building’s core and perimeter.

The cost-efficient structural system was developed using performance-based design principles, with a particular emphasis on seismic and wind resistance. A unique outrigger system utilizing sloping perimeter columns allows for innovative architecture and optimizes leasable space while providing additional tower stiffness for the control of wind drifts. The floor beams serve as outrigger connections between the core and the perimeter columns as well as provide gravity support for the long spanning floors between the core and the perimeter of the tower.

The building, which broke ground in June 2014, is scheduled for completion in second quarter 2018.