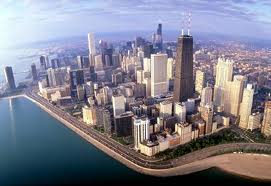 The Chicago Metropolitan Agency for Planning (CMAP) will receive the 2013 National Planning Excellence Award for a Planning Agency from the American Planning Association. Created in 2005, CMAP is the regional planning organization for the northeastern Illinois counties of Cook, DuPage, Kane, Kendall, Lake, McHenry, and Will, and is responsible for producing the region’s comprehensive plan.

The Planning Agency award honors the work of a public sector planning agency that has continually produced a program of exceptional work that has elevated awareness about planning. This is the first year this award is being presented.

For decades preceding CMAP’s formation in 2005, regional planning in Chicago was fragmented, with separate, uncoordinated organizations for transportation (Chicago Area Transportation Study) and land use (Northeastern Illinois Planning Commission) that lacked stable funding and implementation authority. One of CMAP’s first major actions was the development of the agency’s innovative GO TO 2040 regional comprehensive plan, which helps the seven counties and 284 municipalities coordinate policies and investment decisions. It includes strategies to shape the region’s transportation system and development patterns, whilealso addressing the natural environment, economic development, housing, education, human services, and other quality-of-life factors.

“In a relatively short period after its founding, the Chicago Metropolitan Agency for Planning was able to organize, build consensus for and start the implementation of a comprehensive regional plan,” said Ann C. Bagley, FAICP, 2013 APA Awards Jury chair. “The plan addresses issues beyond what a traditional comprehensive plan would include, such as tax policy, local food, workforce development, coordinatedinvestment, and economic innovation.”

In the two years since GO TO 2040’s adoption, CMAP has advanced its implementation by providing technical assistance to local governments and pursuing policy initiatives that address key plan priorities.  Implementing GO TO 2040 requires extensive collaboration, and CMAP continues to leverage relationships built throughout the plan’s development, focusing on underrepresented groups especially in disinvested areas of Chicago and Cook County. Emphases include the growing Latino population and new partnerships between municipalities and community-based organizations. CMAP also has engaged youth in its activities through the Future Leaders in Planning (FLIP) program, oriented toward high-school students.

“The GO TO 2040 comprehensive plan — with both its development and implementation led by CMAP — is a national model for regional planning in the 21st Century,” said Frank Beal, Executive Director of Metropolis Strategies. “Chicago’s business community was a primary advocate for the creation of CMAP, which has yielded a board and staff who are highly attuned to the needs of our region and its communities.”

An independent report commissioned by The Chicago Community Trust, Economic Impacts of GO TO 2040, states that the plan’s regional scope will pay dividends in the form of skilled workers for dynamic clusters of strong industries, an enhanced environment of innovation and entrepreneurship, streamlined movement of goods and people, and governance that is more coordinated and efficient.

“CMAP is grateful to the APA and to our local government, business, and civic partners with whom we share this honor,” said Randy Blankenhorn, CMAP Executive Director.

The Planning Agency Awardwill be presented at a special luncheon at APA’s National Planning Conference in Chicago on Tuesday, April 13, 2013. CMAP also will be featured in an upcoming issue of APA’s Planning magazine.

For a list of all of the APA 2013 National Planning Excellence and Achievement Award recipients, visit www.planning.org/awards/2013. APA’s national awards program, the profession’s highest honor, is a proud tradition established more than 50 years ago to recognize outstanding community plans, planning programs and initiatives, public education efforts, and individuals for their leadership on planning issues.