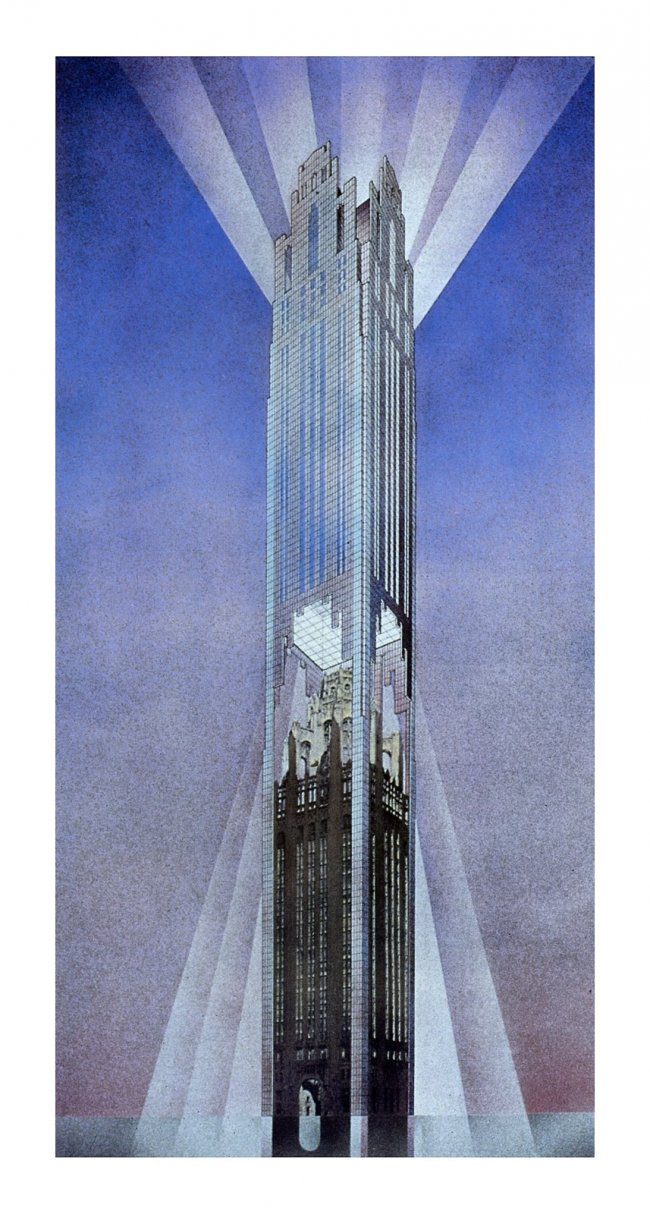 pdubey@v1-media.com on March 6, 2017 - in Buildings, News
Organizers for this year’s Chicago Architecture Biennial are asking 16 young architects to redesign Tribune Tower, like Helmut Jahn did in this drawing for a 1980 contest. ( Helmut Jahn rendering )
Blair Kamin Cityscapes

With the newspaper business booming 95 years ago, the Chicago Tribune immodestly announced an international design contest for “the most beautiful and distinctive office building in the world.” Its bragging proved justified. The 1922 contest drew 263 entries from 23 countries and led to the construction of a landmark neo-Gothic skyscraper.

In 1980, Chicago architects Stanley Tigerman and Stuart Cohen organized a “Late Entries” version of the legendary contest, attracting spectacular drawings by such stars as Helmut Jahn and half-hearted doodles by the likes of Frank Gehry.

Now, the curators of this year’s Chicago Architecture Biennial are putting together what might be called the “Late Late Entries” to the Tribune Tower competition. They’re asking 16 young architects from around the world to design new versions of the skyscraper that will be displayed as a series of 16-foot-tall architectural models in the Chicago Cultural Center.

The big idea is to explore the latest technologies, materials and trends in skyscraper design. If the display comes off as planned, it will give visitors a richly immersive, Instagram-ready experience. The architectural models will be arranged in a grid pattern that harks back to an ancient architectural prototype, the “hypostyle hall,” a monumental, multicolumned space favored by Egyptian pharaohs.“We’re looking for new ideas.

We’re looking to see how these ideas build upon the intelligence of the past,” said Los Angeles architect Mark Lee, who is co-curating the exhibition with his wife and architectural partner, Sharon Johnston.The ambitious plans suggest that the biennial’s backers are striving to top the first edition of the event, which was held in 2015 and drew big crowds and mostly favorable notices from critics.

In a Monday news conference at New York’s Museum of Modern Art, the curators are expected to announce about 100 designers from around the world who will participate in this year’s privately funded, $6.5 million event.

Billed as North America’s largest survey of global contemporary architecture, it is scheduled to run from Sept. 16 to Jan. 7.

The Tribune Tower designs are “fitting to the headline of the whole second biennial — history and modernity,” Mayor Rahm Emanuel said in an interview on Friday.Titled “Make New History,” the biennial will also feature 24 miniature versions of architecturally distinguished interior spaces, the curators said. Architects will reinterpret the rooms in displays, complete with tiny chairs, that measure roughly 2 feet by 3 feet.

The displays, which may bring to mind the Art Institute of Chicago’s Thorne Miniature Rooms, will be exhibited on pedestals. They’ll be shown in a setting, the curators said, that evokes Ludwig Mies van der Rohe’s 1940s master plan for the Illinois Institute of Technology — a horizontal counterpoint to the verticality of the Tribune skyscraper display.

Ironically, the planned Tribune exhibition comes at a time when the Chicago Tribune is anticipating an exit from its namesake skyscraper to a location that has yet to be disclosed. A partnership of Los Angeles and Chicago developers purchased the tower for $240 million last year and is expected to convert the skyscraper and adjacent properties into a mixed-use complex that could include a hotel, apartments, offices and shops

.A spokeswoman for the Los Angeles-based CIM Group said the firm is still “evaluating options for our consultant teams to advance our planning and development process.

”The tower, which opened in 1925, was declared an official Chicago landmark in 1989.

As in its original iteration, the biennial will be headquartered at the Chicago Cultural Center, 78 E. Washington St., and will be free to the public. Racine-based S.C. Johnson is the main sponsor of the event, which is being planned in cooperation with the city’s Department of Cultural Affairs and Special Events. To create a one-two publicity punch for the city, Emanuel announced last year that the opening of the 2017 event would coincide with Expo Chicago, the Navy Pier art fair.

“It’s going to make Chicago a beehive of activity,” the mayor said Friday.

Unlike the first edition of the biennial, the 2017 version will not have a room devoted solely to exhibits on Chicago-themed subjects. “We have Chicago participants, but they’re scattered all over. It just wasn’t a relevant distinction for us in the show,” said Johnston, the co-curator.

The Chicago participants in the biennial include: Ania Jaworska, Design With Company, Inigo Manglano-Ovalle, Marshall Brown, Robert Somol, Tigerman McCurry Architects (where Stanley Tigerman is a partner) and UrbanLab.

The track record of the first biennial suggests the need for caution about the curators’ ambitious plans for the 2017 event.

Seeking a physical legacy for the biennial, organizers and the Chicago Park District touted plans for four lakefront kiosks designed by up-and-coming architects that would house food vendors or bike rental shops.

Yet only one of the kiosks, a low-slung wood structure near the Shedd Aquarium, was installed at its permanent location. Hyde Park residents rejected one that was planned for their neighborhood, and it remains at a temporary location in Millennium Park. The structure for another kiosk was built at IIT, then put in storage. Another never materialized, apparently because it exceeded the budget.

“That’s two more than we had before,” Emanuel said. “Before it was zero.”

To avoid a repeat of such an outcome, Lee said he was already asking architects of some of the planned Tribune Tower models to cut costs, a process referred to as “value engineering.”

“We’re working with them right now,” he said. “Some of them are overly ambitious.”

In addition to the 16 new versions of Tribune Tower, the curators are commissioning two other 16-foot-tall models of designs for the skyscraper from early in the last century. One is a famous, columnlike version by the Austrian architect Adolf Loos that was part of the 1922 competition. The other, which was not officially entered, is a gridded modernist design by the German architect and urban planner Ludwig Hilberseimer.