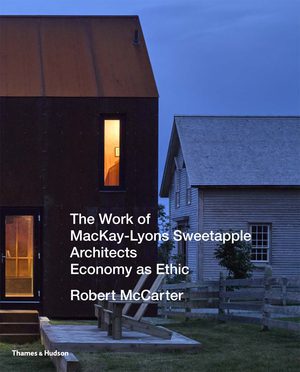 Coming April 18, “The Work of MacKay-Lyons Sweetapple Architects” captures the practical yet beautiful work of one of the leading architectural firms in the world

The “modern vernacular” work of MacKay-Lyons Sweetapple Architects—winners of more than 100 awards, including the 2015 Gold Medal from the Royal Architectural Institute of Canada—is characterized by an ethically driven desire to use minimal materials to maximum effect, and by its deep engagement with the landscape and climate of maritime Nova Scotia, where it is based. The overall result is an architecture that is both pragmatic and poetic.

“The work of MacKay-Lyons Sweetapple Architects is predicated on the belief that what really matters in architecture is not fashion and form, but the material culture of building and the making of places,” McCarter writes. “Understood this way, architecture has everything to do with how its spaces are ordered to house the activities that take place within and between them; with how a building engages with its context and the history of human occupation that has taken place there; with how a building is constructed, how it is structured, and of what materials it is made; and with how all these characteristics affect the experience of those who inhabit it.”

THE WORK OF MACKAY-LYONS SWEETAPPLE ARCHITECTS is an inspiring monograph that captures the practical yet beautiful work of one of the leading architectural firms in the world.

About the Author and Contributors

Robert McCarter is an architect, professor, and author. He is the Ruth and Norman Moore Professor of Architecture at Washington University in St. Louis.

Juhani Pallasmaa is an architect, professor emeritus, and Academician of the International Academy of Architecture.

Kenneth Frampton has worked as an architect and as an architectural historian and critic, and is now Ware Professor at the Graduate School of Architecture and Planning, Columbia University, New York.

THE WORK OF MACKAY-LYONS SWEETAPPLE ARCHITECTS: Economy as Ethic

THE WORK OF MACKAY-LYONS SWEETAPPLE ARCHITECTS