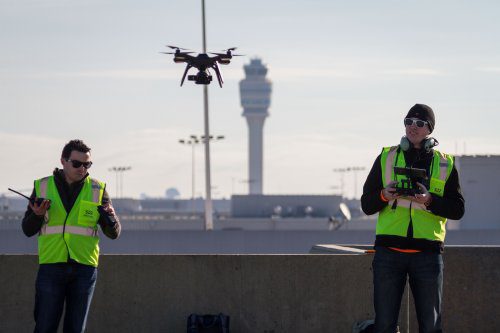 Atkins, one of the world’s leading design, engineering, and project management consultancies, helped orchestrate a first for the aviation industry by successfully flying a drone over Hartsfield-Jackson Atlanta International Airport (ATL), the busiest airport in the world.

Working with partners 3DR Robotics and Autodesk, the team flew the drone on Jan. 10 over the airport’s West ground transportation curb and North and South parking garages, which are being demolished and rebuilt in order to facilitate construction of a new ground transportation hub and airport hotel. The operation, the first FAA-approved commercial drone operation in Class B restricted airspace, was done safely and without disruption to airport users.

“The importance of this successful drone flight cannot be overstated. By flying a drone over such a critical location safely and without disruption to passengers, we have ushered in a new era of airport construction,” said Chris Harman, Atkins senior project engineer.

The team performed a total of seven flights around the parking garage, capturing over 700 nadir and oblique images and covering an area of 40 acres. The images were uploaded to a cloud-based program operated by 3DR, where they were automatically processed into accurate 3D point clouds. The models will be used by Atkins to plan the demolition process and organize construction so to minimize effects on the airport’s daily activities.

“By using a drone, we were able to collect a great amount of accurate data quickly, which is critical when even the smallest inconvenience can disrupt airport operations or cause delays,” said Harman.

In addition to ATL, Atkins has provided engineering services for some of the world’s largest and busiest airports, including: