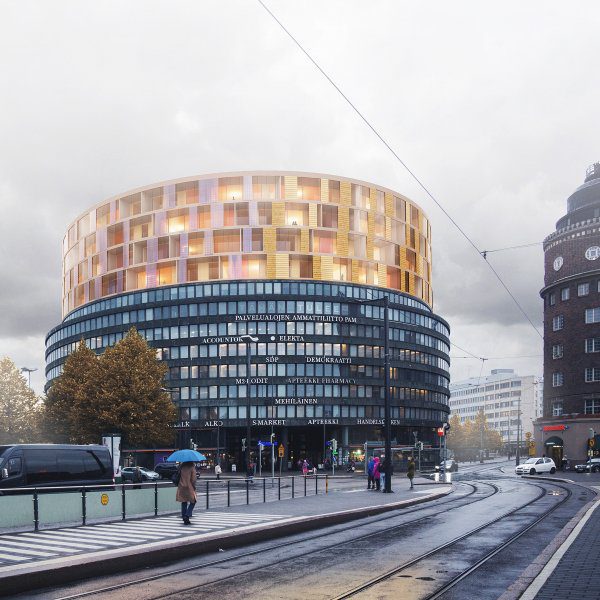 Extensions to existing buildings are beginning to rise above the urban and industrial areas of Helsinki’s currently rather horizontal skyline. As The Finnish Broadcasting Company YLE reports, the number of extensions upward is still quite small – yet there is growing interest in the air.

The demand for housing in urban areas continues to grow globally. Today more than half of the world’s population is living in the cities, according to the UN’s The World’s Cities in 2016 report.

With limited availability of land and building plots, the most obvious way to increase housing is upwards, by building upon the existing fabric of the cities.

As part of its urban development Helsinki is clearly among those cities planning ahead – if not yet upwards, The Finnish Broadcasting Company YLE reports.

The new city plan, approved in October 2016, will guide and define the development of the city and its land use far into the future. It enables the capital of Finland to grow to at least 860,000 residents by 2050 and aims to have one third of all the residential construction in the city be complementary building. These complementary new residences will either extend existing building stock or be built directly beside it.

Could today’s roofs be the building plots of tomorrow?

According to the City of Helsinki the total area of its roofs is about 3,500 hectares, which is twice as much as the area of its parks. The potential above the city is thus enormous: from green roofs, solar panels and loft building to additional floors.

“It’s hard to imagine that there would be wow effects on every block,” Lindroos says.

Architect Jari Lonka agrees with Helsinki’s policy of constructing tall buildings only in strictly delineated districts. On the other hand, he says, the horizontal nature of Helsinki doesn’t mean that many existing buildings couldn’t be raised.

Urbanisation has increased interest in building with wood

Lonka is a partner at L Architects architectural office, which recently took part in Metsä Wood’s international City Above the City competition. The competition challenged architects from around the world to design innovative wooden extensions for well-known, centrally-located buildings in the world’s most populated cities.

L Architects’ award-winning proposal, Plug-In, introduced a concept for the iconic building Ympyrätalo – The Round House – in central Helsinki. The concept, which includes a wooden extension, has attracted significant interest in Helsinki.

“The Round House was chosen to be the building as its form is unique, the building is very systematic and it could realistically be extended,” Lonka says to YLE.

The use of wood has proven to be a significant solution to urbanization and building upon the existing. Because of its lightness and fast construction time engineered wood products, such as Kerto® LVL (Laminated Veneer Lumber), is an ideal material for this challenge.

“Urbanisation has increased interest in building with wood. The potential for timber extensions is large – for example over 100 million square metres in Germany alone,” says Mikko Saavalainen, SVP of Business Development at Metsä Wood.