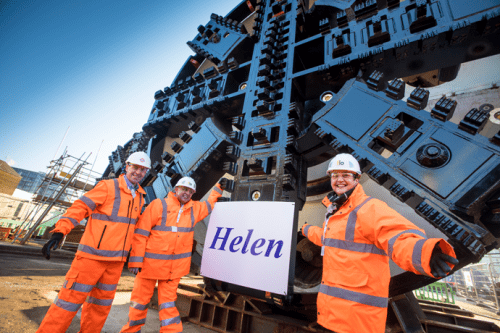 Following tunnelling tradition, the TBMs have been given lady’s names as this represents a sign of good luck for the tunnelling ahead. London Deputy Mayor for Transport, Val Shawcross visited the Battersea Station NLE site, and ceremonially announced both TBMs names, ‘Helen’ and ‘Amy’, which were decided as part of the project’s community engagement initiatives with local schools.

@ARTBA, Construction Industry Allies Develop COVID-19 Guidance Materials https://t.co/NrHKzg16ML
4 days ago
@FTA_DOT Makes Emergency Funding Available for #Coronavirus Needs https://t.co/3j7xg4ITu9
2 weeks ago
@OnScaleInc OnScale is Providing Free Cloud Core-Hours to Customers to Mitigate Engineering Productivity Loss Relat… https://t.co/2kznD1Kh0d
2 weeks ago
You can also visit our website (https://t.co/5ChDhKH2IT) to verify the latest conference cancellations and postpone… https://t.co/DhAiikvEtB
2 weeks ago
With limitations on travel and working from home becoming mandated across the country and globe, please feel free t… https://t.co/OTQosM2hWP
2 weeks ago
it will be “business as almost usual” here at Informed Infrastructure. All of the contact information you find in t… https://t.co/osIMDhV6bP
2 weeks ago
STAY SAFE OUT THERE: In these trying times, we aim to be a vital resource for our readers and the engineering commu… https://t.co/qFrDnwEbKv
2 weeks ago
@aisc Cancels 2020 #NASCC: The Steel Conference Due to Coronavirus Threat https://t.co/Dd0Nv4nRxI
2 weeks ago
Structural Engineers Foundation Fred Haas Scholarship https://t.co/UDaFz3eW9N @SEAOIYEC
1 month ago
The Washington State Department of Ecology has recently found that Bio Clean’s WetlandMod®, a horizontal flow biofi… https://t.co/YDd90gMra5
1 month ago